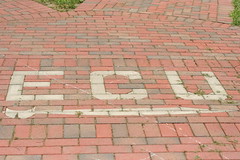 We all know if you are a big gun in the world of technology, especially from the US, you can seem untouchable. If you are the world’s largest networking company, you definitely act like it.

So, I wasn’t hugely surprised when I read today that Cisco has been accused of ripping off a slogan from the East Carolina University for one of its own advertising campaigns.

“Tomorrow starts here” is plastered all over the literature from ECU –  a facility that specialises in technology and software development. In fact, Google that phrase and, ignoring the news coverage of this unsavoury event, you will see the university’s YouTube channel, full of clips on how to better yourself through education.

Its chancellor, Steve Ballard, claims his institution had used the phrase for over 10 years and had even run campaigns in the likes of Forbes and Wired to promote the university.

That means I find it quite difficult to believe the big advertising bosses at Cisco had no clue it was being used by someone else with, let’s face it, a grander purpose that selling hardware.

Cisco has yet to make a statement on the case – we are expecting something to come through later this afternoon – but I wish luck to the ECU and to the tomorrow’s of its students. You have to love a bit of David and Goliath court room drama, right?