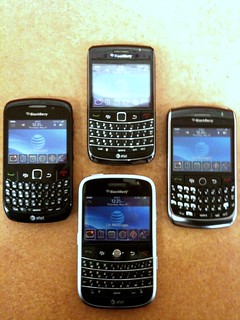 Everyone knows I am a bit of a fan girl when it comes to the BlackBerry 10 OS, along with the firm’s first, and indeed flagship, device running it – the BlackBerry Z10.

However, its continuing failure across 2013 showed I was one of the very limited numbers celebrating BlackBerry’s new direction in touchscreen mobiles, rather than its classic QWERTY keyboard design.

It never fully moved away from the tradition, launching both the Q10 and Q5 to keep the button tappers happy, but it seemed to be aiming its sights on a new market, claiming to be as swift and shiny as its Apple and Android competitors.

But just having me and Karl Flinders on-board was not enough for the new CEO John Chen (we are sure it was enough for Thorsten though….).

In an interview with Bloomberg at this week’s Consumer Electronics Show (CES) in Las Vegas, he claimed hardware was integral to the company and, although “you never say never,” having its own handsets was still very important, rather than the alternative of just licensing the software.

But it seemed along with returning to its enterprise roots, BlackBerry would also be returning to the safety of its famed keyboard design.

“I think there are enough leaks in the market that the [next handset is known to be] a touchscreen… but personally I love the keyboards,” said Chen.

“So, when you look to BlackBerry going forward with keyboards, I wouldn’t use the word exclusively, but predominantly.”

The promise comes just after the revelation BlackBerry is suing start-up firm Typo – financially backed by American idol’s Ryan Seacrest – claiming its iPhone case, which provides a physical keyboard for iOS users, infringes on its own patents.

Chen didn’t want to talk much about the case, but said with 44,000 patents, his company should see some business benefits from that.

Watching the interview, I do have some hope for BlackBerry. As Chen admits, he is a “factual engineer” with an enterprise software background and he knows the market BlackBerry has been a success in. Focusing on its most popular features and its biggest market within enterprises is surely the best step forward, rather than attempting to compete with the cool kids and, let’s face it, losing badly.

There is still a long path to recovery for Chen and his new team at BlackBerry, but now they have realised the less hip but more profitable world of business is the future, I am feeling much more optimistic, even though I still prefer the Z10…