Whenever anyone talks about NFC at the moment, we all get pound signs in our eyes, thinking about how good it is to pay with the touch of a card or mobile phone, rather than entering a pesky PIN. 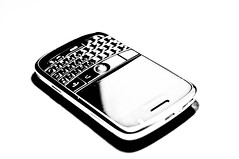 Well, we might not be there yet – if you have tried to quickly pay with NFC, you will have been severely disappointed – but ‘payments’ is definitely the answer most would give if offered ‘NFC’ in a word association game.

The thing is, and I cannot emphasise this enough, we aren’t there yet. NFC might be built into a select number of handsets, some banks are starting to issue touch and pay cards, but NFC payments is much more a look into the future than the current state of play.

However, NFC on its own is being used in some really innovative ways already. I spoke to Gerry Kelliher, senior director of UK sales for RIM, today about how the BlackBerry manufacturer was using the technology, having already launched four phones – two Bolds and two Curves – with NFC built in.

As well as the little, consumer benefits of it like BlackBerry Tag for exchanging data on mobiles by tapping them together, or BlackBerry Music Gateway – same difference but transferring music – enterprises of all sizes are using NFC for tracking, authenticating and recording purposes.

Take Lanarkshire’s mental health association. A new partnership with RIM and app developer Skillweb has enabled 75 support workers to tap in and out when they visit patients with severe mental health problems, meaning exact records are kept of when they are in attendance and how long is spent there. This can then be checked to ensure each patient is getting the right care.

On a more commercial basis, Nottingham-based Sovereign Security are using BlackBerry handsets for their guards to check in at sites and communicate with one another, giving customers more confidence the firm is doing its job and enabling the company to keep track of all their guard’s activities.

NFC is a great technology with a bright future. I just think we should be making more of a song and dance about what it can and is doing now, not what it might be used for further down the line if all the right parties finally get their acts together.