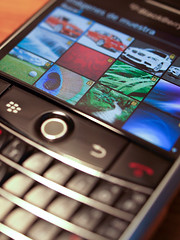 This morning, I was plonked into a keynote theatre half an hour before anything was due to start. I ended up discussing with a colleague from a rival publication how we both felt all we had done in the past few weeks was write or talk about BlackBerry.

RIM’s rebranded media relations team has been going ten to the dozen in the build-up to last week’s big launch of BlackBerry 10. Days of briefings, preview after preview of the new operating system and invites galore to events that have been a mixed bag of valuable and, well, less so.

But, when a company like BlackBerry comes calling and promises updates to their strategy, it is hard for a technology journalist to resist. It is almost addictive to follow this company that has had a black mark firmly on its school report for the past few years, but keeps promising to perform better next term.

So, here we go again. I am now in Amsterdam at BlackBerry Jam, the firm’s developer conference.

There was some enticing news for the developer community this morning, being promised a new programme to build software for the upcoming Q10 handset with that iconic BlackBerry keyboard. There was also a little gift in the form of a shockingly red Z10 handset for all those developers who had got their apps ready in time for the BlackBerry 10 launch.

But it all felt a little desperate. Yes, you need the developers on board but individually built gifts to say thanks, or really to drive them to build even more applications? Oh dear.

It felt even sadder after I had spoken to William Vablais, head of developer relations in EMEA.

“You have to see where we were a year ago,” he told me. “People were laughing in our face [and] saying why are you even talking to us, you are dead, dead in the water, not interested!”

Oh BlackBerry! It can’t have been that bad! Well, ok, maybe it was. I remember an analyst referring to its results last summer as watching a puppy being kicked.

That’s the thing, especially in the enterprise world. BlackBerry is like that puppy that we loved when it was full of youth, but as we watched it get old, we just felt sorry for it. Now, as it shows glimmers of hope with its new platform, we are all keeping our fingers crossed and wondering whether you can teach an old dog new tricks.

Desperate or not, they have got the developer element right. There is no question applications are key to attracting users and developers making sure those all-important programmes give the best experience are priceless.

BlackBerry’s tactics may seem a little too eager, but it has woken up to the fact apps is where its at and if it has any chance of pulling through, it needs the devs on side and all the best built applications on its handsets.

If it convinces them, the future could be brilliant for the old boy. I know I will be watching…