Recently I blogged my thoughts on why mainstream backup products don’t protect BYOD devices – laptops, tablets, smartphones etc – and came to the conclusions a) BYOD backup is a different beast to mainstream fixed source backup and is only provided by some specialised suppliers, and b) many BYOD users are probably using Dropbox et al.

However, it turns out I was off the mark, especially on the second point. In fact most organisations are not backing up these portable devices at all. That’s the conclusion to be drawn from last spring’s SearchStorage.com purchasing intentions survey. It found that more than two thirds of tablets and smartphones and nearly half of all laptops are not backed up (see chart below).

I banged on about potential BYOD compliance risks to this in my previous blog. That, you would have thought, would be sufficient impetus for users to rectify this situation. Maybe they want to. But, even if the desire is there enterprise and midrange backup products simply don’t protect these types of device.

All of which leads to the conclusion that the backup suppliers really are missing a trick. It is quite literally a huge unfulfilled market. If the backup software makers had BYOD backup functionality in their products they could deploy one of IT marketing’s greatest weapons – fear. So, why they don’t remains a mystery. 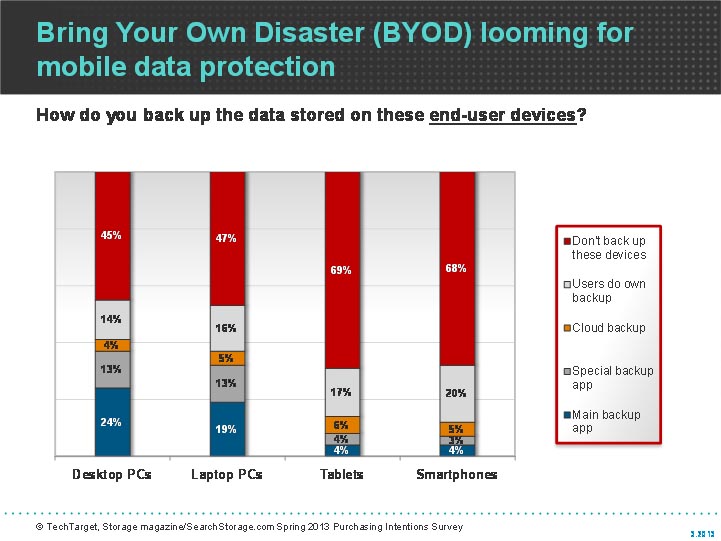