It may have sounded like a bird-brained idea but it’s paying off for McMillan Cancer and several other charities having Chris Hanson, Computacenter’s international sales manager spend time on the fourth plinth of Trafalgar Square in a pigeon suit handing out sweets to kids and adults.

Hanson has collected more than £1,000 for the charities, a sum Computacenter will match, from posting tweets on twitter. To find out more follow Chris on Twitter.

Hanson said he got the idea from his childhood when he used to go to the square to feed the pigeons. “Now that you can’t do that, I thought I’d use Anthony Gormley’s
One and Other show to feed the children and publicise our charitable work,” he told Computer Weekly. 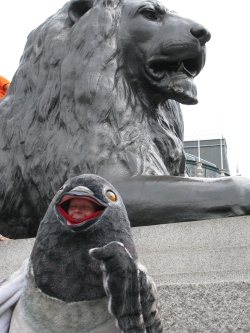