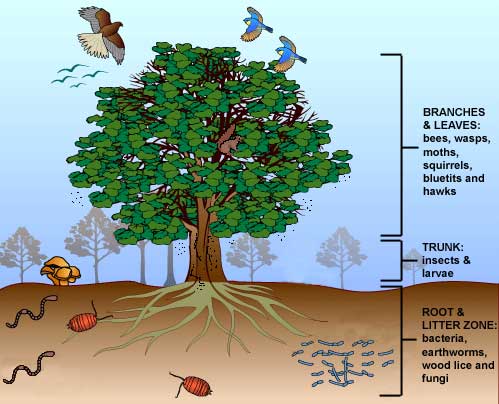 The coalition government was elected on the promise that it would resolve the notorious problems that had turned public sector IT into a disaster story.

It expressed some firm ideas. Then it had second thoughts. Now two and a half years on, its flagship policy has stalled.

What happens next will depend on the results of a public consultation, due imminently. The government’s dilemma is how to implement the policy.

The question for the consultation is what the policy really means.

The government’s founding coalition agreement said in 2010 it would solve both problems. It would back open source software, a disruptive technology that was cheap and innovative. And it would promote competition by breaking public IT contracts up into smaller components. 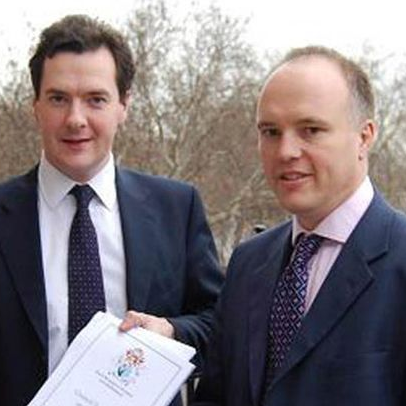 The man behind the reforms, deputy government CIO Liam Maxwell, insists government has made progress.

This progress was demonstrated last week, he says, when the government launched gov.uk, a website. It was built using open source tools.

Maxwell reckons the government has also cut £400m off its ICT bill of around £16bn by breaking some of its larger contracts up.

Yet the keystone of both these policies has still to be put in place. That is a third policy – its policy on open standards. Without it, the government IT strategy is a dead duck. It could neither remove the market barriers to open source software nor break its IT systems up in the way it wants if it didn’t have open standards.

The problem was described recently by your correspondent in another place, thus:

“The market problem had been derived in the first place from technology’s inherent need to work together, as a coherent system. The way it did that was using standards of communication, so one part of the system could co-operate with another, sharing applications, functions and data.

“The problem was that technology markets had coagulated into competing ecosystems based on their own proprietary standards. Dominant ecosystems used their standards to lock competitors out, stagnating the market.

“The coalition proposed that it would place government functions and data in the broadest possible ecosystem to ensure no single supplier or technology was so powerful that it couldn’t be swapped with any other.

Thus contracts could be disaggregated and dominant suppliers replaced without causing problems for existing systems, while open source software could be deployed because it wouldn’t be locked out by a proprietary ecosystem’s standards.

“The government would do this by employing open standards – standards that can be used by any market participant and implemented in any technology without restraint.”

But the three leading vendors of proprietary ecosystems – Apple, Microsoft and Oracle – opposed the policy.

Microsoft has meanwhile sought to explain its opposition to UK policy by claiming its dominant proprietary ecosystem benefits the economy.

Asked to explain its position, it pointed to a 2009 study by IDC that said its Windows ecosystem would generate £18bn of revenues for UK companies that year.

For every £1 of revenue Microsoft generated in the UK, its supply chain partners would do £8.84 of business. Across Europe, companies in Microsoft’s ecosystem would generate €110bn revenues. 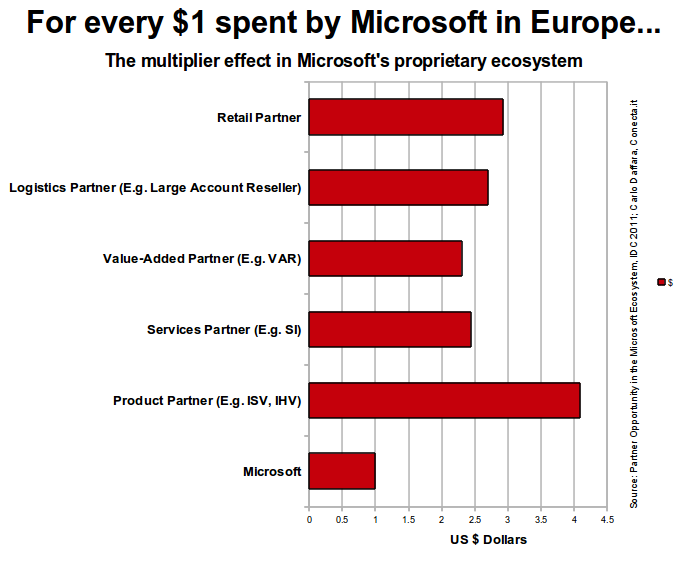 But a study published by the United Nations University Institute for Advanced Studies found that for every €1 spent on proprietary software – in an ecosystem defined by proprietary standards – €0.86 went back up the supply chain to a company outside Europe.

In contrast, said the UN study, spending on open source software – operating necessarily in an ecosystem delimited by open standards – resulted in about three times the amount of money staying in the region where it was invested.

Its numbers had apparently proven the point that always seemed obviously so: the owner of a proprietary ecosystem would enjoy the spoils, though his cronies might get rich too. He wouldn’t get nearly as rich if he joined the open standards ecosystem, but a lot more people would get a share of the spoils. 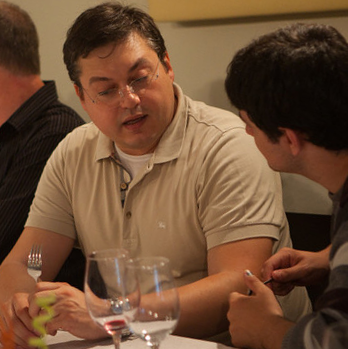 Carlo Daffara, the study’s author, says his further calculations show that the UK saves about £80bn-a-year by using open source software. This figure is unpublished. You read it here first.

The saving comes, he says, from the way in which open source software is developed: collaboratively, with applications and functional components being shared freely, so anyone can adapt them or deploy them in their own systems.

It’s the re-use that saves money, as Maxwell had been saying when pushing these ideas in Conservative technology policy papers. It also makes software less prone to error. Both advantages rely on open standards.

This was the basis of UK policy. But the government has been hiding in a bunker since the conflict between proprietary technology companies and their open source competitors became a battle of global proportions.

This conflict has made the UK look like an island, and the government seem ready to become a cowardly appeaser. It made a bold stand. But there is a strong likelihood that the Cabinet Office will abandon its open standards policy or fudge it in a way that makes it look one way and act another.

But the Cabinet Office should take heart after the humble appearance of Sir Tim Berners-Lee at the opening ceremony of the 2012 Olympics.

Sir Tim had of course created the greatest of all the world’s technology ecosystems, the World Wide Web. He has written that the Web’s inestimable commercial and cultural benefits were possible only because it was built using open standards. He appeared at the Olympics like a benign master of ceremonies, gently waving from the centre of a whirlwind of steroids and trumpery, like the personal embodiment of open standards: miraculous and fragile, yet when defended resolutely, triumphant.