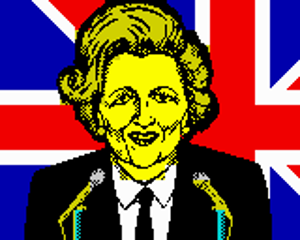 The coalition government’s “digital transformation” of public services continued a programme of privatization begun by prior Conservative governments – most especially Margaret Thatcher’s government of 1983.

Its big idea was to replace the big suppliers who did most public sector IT with an ecosystem of SMEs.

Having discredited the big suppliers with a vague accusation of corruption, it set about usurping them and the big government departments held up by their systems. Its alternative would be like the difference between a stagnant pond with a few prize, hand-fed carp and a dynamic ecosystem churning with oxygen and healthy food-chain rough-and-tumble.

That’s what they offered on the face of it. From another perspective it continued work begun in earnest by Margaret Thatcher’s government of 1983.

The coalition’s recent reforms were similar to the privatization programme of the 80s and 90s – not least because coalition Cabinet minister Francis Maude had played a central part in both. They were both also driven by the same powerful forces: technology and globalization.

The consequences then as now: restructuring, mass unemployment, a constriction of public ownership, innovation, and piles of money for a fortunate few. The vision: dismantling public industries (then) and public services (now) would release immense energy and resources to form a creative chaos from which innovation would grow.

The role model for this was one of the most proud and most innovative moments of modern British history. That was the ZX Spectrum, the home computer beloved of children from prime minister David Cameron and chancellor George Osborne’s generation in the early 1980s.

( If you were fortunate enough to do home computing in the 80s, you might be amused to consider the irony of the Conservative leadership coming from families who probably used snooty BBC Micro home computer (an over-priced work of public sector perfection); while Labour leader Ed Miliband claimed earlier this month a childhood love for the down and dirty free-market funbox, the ZX Spectrum.)

Cameron’s government had devised for public services the same kind of innovative ecosystem that had distinguished the ZX Spectrum from its rivals.

The Spectrum nurtured a thriving ecosystem of computer games publishers because it was easy for anyone to have a go. The computer itself had been cheap and cheerful, so lots of people bought it and instructional media flourished. Plucky nerds were encouraged to write games for it because its software was distributed on cheap audio cassette tapes; and Sinclair Research, its manufacturer, put no conditions on people producing software. So the market for Spectrum software thrived.

Sir Clive Sinclair, its inventor, even had a vision of the future that foreshadowed the coalition’s dissolution of the public services. It was a vision of computer automation, mass unemployment, ecosystems of small, innovative companies, and vast concentrations of personal wealth.

He described it to a meeting of Mensa, the society for clever people of which he was chairman, at Cambridge University, six months after he launched the ZX Spectrum in 1982.

“We have been passing through a great industrial age in which the economic basis of society has demanded the bringing together of people in great numbers, many thousands per factory, many millions per city,” he said.

“This is not a passing phase of recession, but a trend which will last until the end of the century, during which I expect the manufacturing industry to shed a further seven million jobs and for the proportion employed in manufacturing to decline from some 42 per cent of the population to less than 10 per cent.”

“This will occur as automated systems are now radically cheaper than manual costs,” he said.

“We must change the pattern of expectation – no longer to prepare people for a life-time’s work in major organisations but to give them the self-reliance for a broader role in smaller groups.

“Many, if not all, of today’s young people will always work for small organisations and indeed must found them. We must encourage people to follow this route if we are to create future employment,” he said.

Sinclair’s prediction about manufacturing employment was close enough. But though he was unhappy about the corresponding unemployment, there was not much anyone could do to stop it.

Because at that moment Francis Maude, the minister who engineered Cameron’s premiership, was preparing to stand in the 1983 general election that would introduce him to parliament and launch him on a career dedicated to hastening industrial transformation by privatizing public industries.

He quickly became one of its most radical agitators, pushing for the NHS and schools to be privatized as well, at a time when the idea was so radical that even Margaret Thatcher wouldn’t stomach it.

In the midst of a global recession, their government embarked instead on a more modest programme to privatize public-owned industries:

British manufacturing had been in decline, relative to the rest of the economy, since the US-led Bretton Woods reforms of 1944 did for the world economic system what Cameron has done more recently with public services: it broke the existing regime open so anybody could have a go.

British manufacturers had grown accustomed to privileged trading terms within the British Empire. Their exports were bound to decline, from dominance to something more mutual.

By the 80s, computers and communications were hastening their transformation from national colonial industries into multinational corporations.

Now amidst another global recession, the technologies of automation have begun to encroach again – this time on the remaining arms of public services and administration.

The prime minister – Cameron – proposed using these forces to open up the market for public services. But really he meant to turn what remained of public services into a market. Or Maude saw that he did, anyway. You can read more about that <here>. But even that is only part of the story about the coalition’s scheme to privatize the public services. You can read the full story <here>.