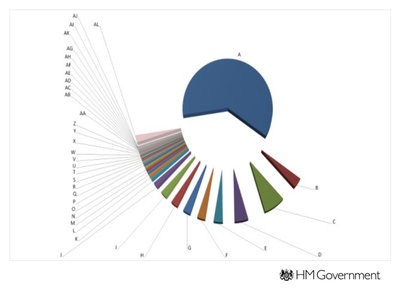 Central government buys the majority of its standard software from just one supplier: Oracle.

This was the first revelation delivered by the government’s long-awaited Asset Register, now known as the Assests and Services Knowledge Base (ASS IT). It shows government is finally getting a clench on where it spends its ICT budget – a prerequisite for the government ICT stategy.

“It’s unacceptable to spend £25.9bn of tax payers money between now and 2017 without fundamentally finding out what we currently have,” said Bill McCluggage, deputy government CIO, when delivering the result at a Cabinet Office meeting with suppliers last week.

Data collated from 18 central government bodies had revealed that of 17.2m software licences they had bought, 10m of them where for Oracle software.

“What does that tell you about the overall marketplace, in terms of what’s happening there with the smaller vendors?” said McCluggage. “That’s only one output”.

What does it tell you about the state of the market, indeed. We put the question to Oracle. It was unable to answer.
And what will the government be doing about it?

Well there was that phalanx of senior civil servants Cabinet Office assembled before an audience of more than 700 ICT suppliers last week. They reported an impressive array of procurement reforms. They seemed like they meant business. John Collington, government’s chief procurement officer, said: “We absolutely mean it”.

You can believe what you are told about this because most of these reforms are impelled by irrefutable forces the coalition has embraced with enthusiasm. It has supported the Lean revolution’s sweep through the Government Procurement Service. It is encouraging the transparency revolution likewise. It is participating in European Commission reforms of procurement rules.

Government progress on ICT reform is also not insignificant when you consider its ASS. The Office of Government Commerce (now the Government Procurement Service, under Collington) promised something like an asset register 10 years ago. The Cabinet Office has been on it since 2009. It’s about time it showed some movement.

But even while it shows real signs of progress, its aspirations have been tempered by the realities of office. A year since Cabinet Office minister Francis Maude declared an end to “IT mega-deals”, the government has still been signing IT mega-deals. Its longstanding promise to create “a level-playing field for open source” has become a promise to create a “a level playing field for open source and proprietary software”. Open standards replaced open source in importance over the year – now that policy looks short of support. Its promise to “put an end to the oligopoly of large suppliers that monopolize its ICT provision” has been usurped by an intention to create “a level playing field for SMEs and larger companies”.

You might ask whether this prevarication indicates the government’s strategy was ill-conceived or was always hot air. You might also ask what arm twisting has been going on behind the scenes. The need to create level playing fields only exists in relation to an underdog like an SME. Large companies and proprietary vendors have no call for leveling and should have no need for placating.

Last week’s meeting was in effect a plea for suppliers to support the government’s efforts. It’s attempts at transparency, collaboration and contracting more SMEs are dependent on large suppliers. The meeting had an Obaman tone: we have high aspirations but can only do it with your help. Cabinet Office wants suppliers to act in the public interest, to collaborate for the common good. They are reluctant even to supply data about their activities – it is for them a self-defeating activity. So Cabinet Office has resorted to putting clauses into their contracts to make them play ball.

There is otherwise little left of the government ICT strategy than had already been promised in the Labour government’s pre-election 2010 ICT Strategy – a tedious summary of market-led reforms coming to fruition under the coalition with not inconsiderable influence that but lacked the courage of its convictions.

With the coalition’s reforming zeal becoming stuck in the mud flats it is already losing puff for bombast and might soon have no fight left for real reform. A lot will depend on reform of the procurement service. Suitably trained, its officers could conceivably orchestrate the inclusion of the innovative, agile supply base the government seeks.

So what does it tell us about the state of the market that 70 per cent of commercial off-the-shelf software in central government is Oracle?

Intellect, the IT trade association, refused to venture an answer. “I don’t think it tells you anything other than 70 per cent of software licences are delivered by Oracle,” said an Intellect spokesman.

“Our view is there is a dynamic marketplace,” he said. “We don’t necessarily recognise that there’s an oligopoly.”

Intellect has declared in recent months a raft of measures to support the government’s attempts to create what they call a more dynamic marketplace. This was not because the market wasn’t dynamic, the Intellect spokesman told Computer Weekly. It was because the market is dynamic and therefore requires new intiatives to move with it.

But why if the market is so dynamic does Oracle supply 70 per cent if all COTS software to central government?

“You need to address that to government,” said the Intellect spokesman.

And why if the market is so dynamic do 10 companies supply 80 per cent of all government ICT? (Or however much it is).

“Ten suppliers does seem to be a reasonably large number,” said the Intellect spokesman.