Europe admitted it had developed an unhealthy dependency on Microsoft in 2003, ten years after it first installed Microsoft software on its computers. It vowed to do something about it. But it couldn’t kick the habit.

This trippy reasoning was what European Commission’s Directorate-General for Informatics (Digit) used in 2003 to justify doing yet another backroom deal with Microsoft, reveal documents disclosed to Computer Weekly.

The “purpose of the operation” was, said Digit, “The need to mitigate the [European Institutions’] dependence оn Microsoft software products”.

European administrations, led by the Commission, had been buying Microsoft software without an open competition for a decade, in contracts known as negotiated procedures: deals done without informing tax payers and Microsoft competitors. It could only do such backroom deals with good justification.

Specifically, it said, the Microsoft deal would: “Prepare the ground for a scenario in which other technical solutions – particularly those based on Open Source Software (OSS) – may emerge as viable alternatives, not least because the Commission is actively promoting the use of OSS-based solutions in several policy areas,” said the Evaluation Report in which Digit justified the fourth Microsoft deal on 8 December 2003.

It was absurd, junkie logic. And Digit, its official papers addled by its dependence on Microsoft, was making the same hopeless claims of reform: it would kick the habit if it could just get one more fix.

The 2003 ambition was shown to be as fruitless as the 1992 ambition when nearly 10 years later again, on 21 October 2011, the Commission’s Information Resources Managers for Infrastructure decided to upgrade to a Microsoft suite based on Windows 7 and Office 2010.

EU law permitted these backroom deals, but they were only permitted for three years. Digit in 2003 signed its fourth successive backroom deal with Microsoft since 1993. It would refresh Microsoft software infrastructure for 31,400 PCs and 850 servers, helping cement Microsoft’s monopoly by endorsing it with the weakest of justifications.

There had in 2003 been a clamour for public administrations to consider open source software as an alternative to the Microsoft monopoly. Let aside that Digit claimed open source software was not mature enough to be taken seriously. Not only were national administrations demonstrating it was, but open source was not the only alternative to Microsoft. The appearance of open source in Digit’s justifications for doing more backroom deals with Microsoft implied the only real choice was Microsoft or nothing: we’ve looked at this open source thing that people are talking about, but its not what its cracked up to be – hence we’ve got no choice but to do another backroom deal with Microsoft. 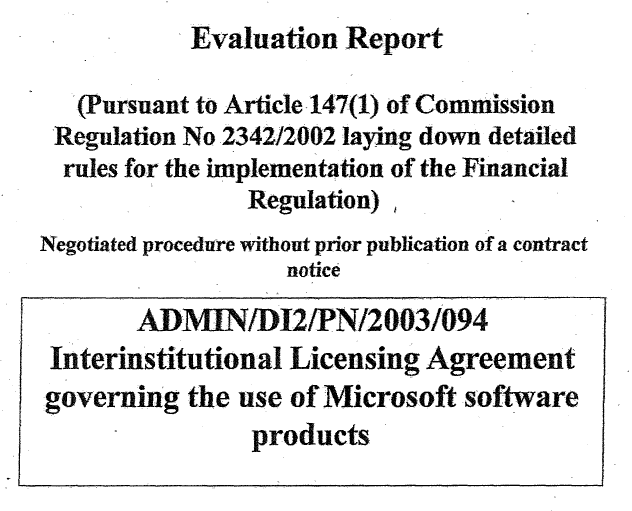 It gave the suggestion that Digit was taking software competition seriously. But it betrayed how Digit either did not understand or did not care that the conditions for competition in business were not enough to ensure competition in software. Software platforms had to be kept open just like EU rules said markets have to be kept open. But EU procurement rules didn’t say Digit had to use open standards, only open procurement procedures. If the European Commission really wanted a competitive software market, it would have at least to back open standards as it said it did in 1992.

Digit instead became so complacent about its Microsoft deals that it didn’t even bother opening backroom negotiations for its 2003 deal until four months before the last contract expired. When it did start talking to Microsoft it learned that Microsoft had changed the rules. It had changed its licence terms to lock customers in to a strict upgrade cycle, and to ensure its sales were more consistent.

This was perhaps the monopolist’s prerogative. There was no evidence that Digit had really factored such disadvantages into its deliberations. Its negotiations over its renewal of Microsoft’s contract dragged on unexpectedly because the new terms were so unfavourable. The new terms would make the EC pay in advance for future upgrades, making decisions like whether to adopt Windows 7 a done deal.