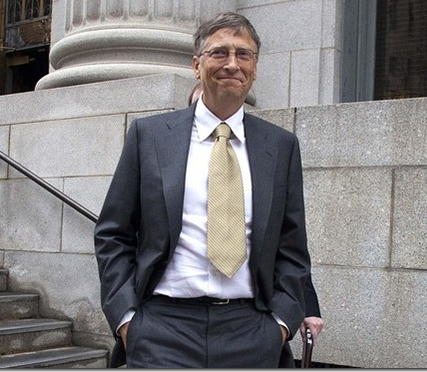 The European Commission gave up pretending there were alternatives to Microsoft in 1996. It side-stepped new laws designed to keep public money honest, claiming exceptional circumstances. It gave Microsoft its business on a plate again.

The new law was Council Directive 93/36/EEC of 14 June 1993: coordinating procedures for the award of public supply contracts. It said public bodies had to be open about how they awarded public contracts, and give everyone a fair chance of competing for them.

Public bodies could ignore the rules and do backroom deals called negotiated procedures, said the new law. But only in “exceptional” circumstances.

Digit, the EC’s Informatics Directorate, said Microsoft’s exceptional circumstances were justfied under Article 6.3.c of the public contracts directive. This allowed it to contract Microsoft without telling anyone beforehand.

It could do this, “when, for technical or artistic reasons, or for reasons connected with protection of exclusive rights, the products supplied may be manufactured or delivered only by a particular supplier”, said Article 6.3.c.

Digit said this meant it could do a “negotiated procedure without prior publication with the company SA Microsoft RV” because this happened to be “the only authorized representative of the products in Belgium and Luxembourg”.

A backroom deal with Microsoft was justified therefore, because only Microsoft could supply Microsoft software.

Digit’s original decision to buy Microsoft, in 1992, had stemmed from its moving the European administrations onto PCs. It actually did the deal in 1993, as it was enacting the public contracts directive. Microsoft’s monopoly in PC operating systems was then well established. Only a year later, the Commission’s competition police fingered Microsoft for abusing its power.

Yet Digit took it for granted that there would be Microsoft operating systems on its new PCs in 1993.

“During the first half of 1993, the Commission conducted negotiations with the firm for the purchase of Microsoft licenses for operating systems (DOS / Windows), following the selection of the architecture of PCs of the Commission, as well as office software (Word, Excel, ..),” said the Digit’s documentation at the time. It gave no justification.

In 1993, Digit said, dubiously, it was doing backroom deals with both WordPerfect and Microsoft because only they could satisfy its needs for PC application software.

But it dropped WordPerfect before it had even finished rolling it out. Microsoft had used its operating systems muscle to give its PC applications a boost over competitors. Just last week, it got told off about this in court in Utah.

Novell, which owned WordPerfect in those days, had claimed damages for not having being Microsoft, which had become a handicap for Microsoft applications rivals by the time the European Commission was coming to refresh its desktop computers in 1995.

Novell lost the case last week, as it happens. It wanted damages for its operating systems business, not its applications business. The court was neverthless convinced Microsoft had given its own desktop applications an advantage on Windows 95. 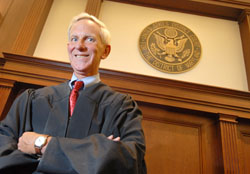 “I recognize that this conclusion may appear somewhat disturbing because arguably it rewards Microsoft for unsavory behavior in the applications market,” said Judge Motz as he threw Novell’s case out on 16 July.

Microsoft had anyway stoked trouble for Novell’s WordPerfect Office suite of applications in the mid-90s. Microsoft Office became a shoe-in at the European Commission.

Novell had trouble producing a version of Perfect Office that was compatible with Microsoft’s Windows 95 operating system. It sold it to Corel in January 1996. Weeks later, the European Commission’s Information Resources Management Board decided to give WordPerfect the boot and open backroom talks with Microsoft.

It was all going to be Microsoft now. There was no technical or market reason why – not that Digit could demonstrate. The Commission hadn’t even got Windows 95 on its computers. It wasn’t even necessarily going to get Windows 95, show documents released to Computer Weekly. Digit opened talks with Microsoft about whether it should migrate to 95 after kicking WordPerfect out. In hindsight it was clear that it would.

It was just simply all Microsoft: operating system, wordprocessor, spreadsheet, presentation package, database, email. In June 1996, a month after Corel released Perfect Office for Windows 95, Digit said it had done a backroom deal with Microsoft because only Microsoft could do Microsoft. 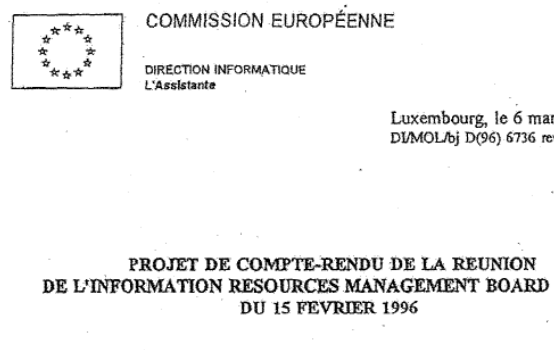 The Information Resources Management Board decided to migrate to word-processing WinWord 6, as follows:

– Until October 1996, a period of preparation is necessary to allow branches to accurately plan their needs and make all arrangements to receive the texts in the new format. During this period, the General Directorates WinWord WinWord 2.0 pass 6.0. The exchange format is WordPerfect 5.2 ,

– Beyond July 1997, remains only the generalized exchange format WinWord 6.0,

– Calls on branches to prepare for March 31, 1996, the draft plans for migration

– Calls on the steering unit to integrate these plans into a comprehensive plan, as well as effector budget allocations and priority to report in July 1996

– Considers that the continuation and expansion of inter-institutional relations are essential to the Commission,

– To this end, the Directorates-General must comply with the rules of production of legislative documents as part of SEI-LEG as they migrate to WinWord 6,

– Supports the IT Department, in collaboration with the General Secrêiariat, develop, install and promote the software SEI-LEG I in branches, and to ensure its use for the production of documents legislator,

– Note that this allocation does not prejudice the possibility of using the formula of the redeployment, which could be offered at the College given the advantages of a unified office in the Directorates-General and the Translation Service. 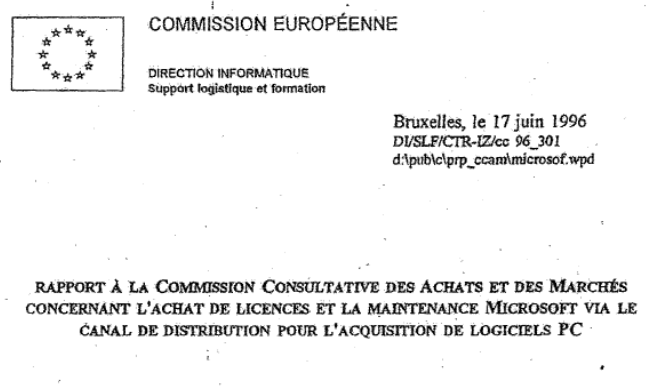 Action arising from the administrative / continuation of a previous action.

3.2. Objective of the action

During the first half of 1993, the Commission conducted negotiations with the firm for the purchase of Microsoft licenses for operating systems (DOS / Windows), following the selection of the architecture of PCs of the Commission, as well as office software (Word, Excel, ..). As of July 1, 1993, a contract was signed with Microsoft, based on the opinion CCAM * No 213/93 (see anneхе I).

February 15, 1996, IRMB decided to choose the product WinWord 6 of Microsoft as word processing unique to the Commission (Annex 2 item 4.2) and abandon the product used WP on the Commission and had the subject of a separate agreement (Notice 105/93 CCAM, see Annex I).

During the past few months negotiating with the firm of Microsoft were conducted by the IT Department with the following objectives:

– Define the terms of the migration WordPerfect – Word (harmonization with the desktop Office suite of office);

– Specify the conditions for migration to a new technical platform (operating system of the client / Windows 95 or NT not yet determined, study in progress);

– Get the price per user decreases and the cost of maintenance to compensate for the increase in the number of users;

– Apply the same financial terms to the other institutions.

Under the provisions of Article 6.3.c) of the Directive 93/Зб/СEЕ Council, the procedure by negotiated procedure without prior publication with the company SA Microsoft RV., Which is the only authorized representative of the products in Belgium and Luxembourg.