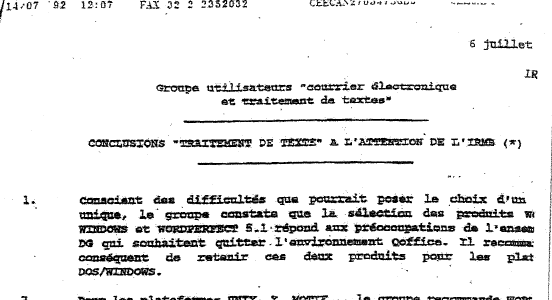 The European Commission has been trying – and failing – to avoid being locked into proprietary Microsoft technical standards since 1992, it has been revealed in official documents released to Computer Weekly.

Its failure then led directly to the decision last year that ensured the EC will in 2013 have been buying Microsoft software for 20 years without a competition. In fact it was 20 years ago this month that EC officials made the original decision.

The Commission’s Committee for Word Processing and E-Mail made the historic decision to use Microsoft desktop software on On 6 July 1992. It was backed up over the following month by various official bodies.

Under the chairmanship of  David Williamson, then EC Secretary General, now Baron Williamson of Horton, life peer in the UK House of Lords, the committee seemed determined to avoid being locked into Microsoft.

It already had some idea how its decision could have serious consequences for software competition. The US Federal Trade Commission was already investigating Microsoft for abusing its market power. In a case that was taken up just a year later by the US Department of Justice and the EC itself, the FTC had accused Microsoft both of giving its desktop Office software advantageous access to the proprietary hooks in its Windows and DOS operating systems, and of tying its operating system customers into commercial arrangements that included its Office software as well.

The EC committee wanted to avoid getting locked into Microsoft. But there was no international standard to govern the exchange of information between users of its computer systems – and between its officials and the outside world. It had no choice but to use proprietary standards.

Despite its best intentions, the EC ended up rolling desktop PCs with Microsoft operating systems across the European administration and its sister institutions between 1993 and 1996 – and signing a deal that tied Microsoft Office in as well.

The European Commission thought it had a way to keep Microsoft in its place. It balanced the Microsoft deal by signing a deal with WordPerfect as well. So in 1993 EC budget holders could buy Microsoft Office or WordPerfect Office.

But that was not all.

“The official exchange format by default between the two systems will be WordPerfect format pending the availability of standardised solutions,” said the report of Lord Williamson’s Committee on 6 July 1992.

This was backed up on 23 July 1992 – 20 years ago this Monday – by a communication of the EC’s then IT department, the Information Resources Management Board (IRMB).

There might not have been any open standards – and that might well have played right into Microsoft’s proprietary interests. But the EC wasn’t going to allow it.

All these good intentions came to nothing however, when three years later the EC turned its entire desktop ecosystem over to Microsoft. It was by then pursuing the software giant on an anti-competition rap itself. But it gave Microsoft a deal to supply everything – from its operating system through to word processors, spreadsheets, databases and presentation software across the entire EC.

The EC had within just three years become so irrevocably tied in to buying Microsoft that the software giant would dominate its desktop environment for the next 20 years. Last year it signed a deal to implement Microsoft operating system and application software across more than 36,000 desktops across the Commission and other EU institutions.

It is still fighting for open standards that will stop it being locked in to Microsoft and other proprietary software vendors, still fighting Microsoft in court over monopoly fines it later imposed for abusing its market power with proprietary standards, and – as of last week – still bringing new competition cases against the software giant for tying people into its proprietary systems.

So what went wrong?

Some answers will appear on these pages in coming days.

Document
The European Commission, in answer to a document request, sent Computer Weekly a copy of the original committee decision by which it first decided to adopt Microsoft desktop software in 1992.

The original was obscured during a scanning process at the EC after it was faxed, and supplied only in excerpt. The document is currently unavailable in its entirety. The original document can be accessed by clicking the image above. The translation is available below.

That document was painstakingly transposed in the original French, then translated using Google Translate.

CONCLUSIONS “WORD PROCESSING” [TO] THE ATTENTION OF IRMB (*)

Aware of the difficulties that arise when choosing a single [product], the group notes that the selection of the products [WORD for] Windows and WordPerfect 5.1 meets preoccupations of [all] DG’s who wish to leave Q-Office. He [recommend] Therefore to retain these two products for the [platform] DOS / WINDOWS.

Given the inter-institutional constraints, and [need to] maintain good efficiency of the operation of [the institutes] group recommends that the official format for exchange by default, sender and recipient do not have the same product, size WORDPERFECT 5.1. the choice of exchange format is trans … pending the availability of meeting the basic standards means that the responsibility and guarantee [End …] dependent default conversion service that does not use the WORDPERFECT, that the service be a transmitter or receiver electronic courier .

Exchange format adopted assumes that institutions do not change, the short and medium terms, their … current. The Group therefore considers that the Commission indispensable assurances in that direction before making a decision.

The group recommends that the conventions of use, including manual typing, are stable under the coordination and general secretariat in collaboration with others concerned, such agreements must have a value binding facilitate electronic transactions, including conversions.

The group attracts the attention of the IRMB the need to access very carefully migration to new systems the importance of providing the necessary budgetary resources.

The group intends to report to IRMB 12 months in light of experience.