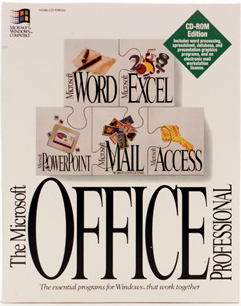 Europe’s ill-fated 1993 migration to Microsoft Office was rubber-stamped by a committee that failed to see how it would get locked into buying Microsoft without a competition for the next 20 years, show documents released to Computer Weekly.

The European Commission used dubious reasoning to justify its decision in 1992 to do a backroom deal with Microsoft. Officials at the time said it was based on a survey of the wordprocessing market. But they took that as justification for buying Microsoft’s entire Office suite – with spreadsheet, presentation, email and database software – without opening the business up to any other competitor. And it threw the desktop operating systems DOS and Windows in as well.

“Under the provisions of Article 58 of the Financial Regulation, [the selection procedure] was carried by direct negotiation with the company Microsoft Corporation, owner of the goods concerned (MS-WORD FOR WINDOWS, EXCEL, and operating systems DOS and Windows),” said the EC Information Directorate at the time.

“The proposed contract with the company MICROSOFT will also extend to other office products offered by the company and are regularly requested from the Commission.”

The EC was effectively giving Microsoft its desktop monopoly on a plate.

Article 58 of the European Financial Regulations ultimately rested on a the rule that: “Contracts may be made by private treaty…where for technical, practical or legal reasons the supply of goods or services can only be carried out by a particular contractor or supplier.”

It meant the EC could do a private deal with Microsoft without opening it up to competitors.

But it had only considered the impact of its decision on the market for WordProcessers. Microsoft was even then already in hot water over its attempts to abuse its dominant market position in desktop operating systems to pin down the entire PC computing environment.

The 1993 procurement was mitigated by an EC decision to standardise its desktops on both Microsoft and WordPerfect Office. The EC chose WordPerfect as the standard format in the absence of an industry, or open standard. The rollout was expected to take three years. By the end of that term, the EC dropped WordPerfect and handed all its business to Microsoft – again without a competition.

The EC said its backroom Microsoft deal was justified in an earlier report that justified buying WordPerfect software on the same terms, again by the Informatics Directorate – now DIGIT: the Directorate-General for Informatics that is still handing the business for the entire European administration’s desktops to Microsoft without a competition.

But DIGIT’s WordPerfect report said nothing to justify a private arrangement under Article 58.

Anyway, it said, it wasn’t justifying any decision to buy Microsoft just yet – that would be done in the later Microsoft report.

The only justifications DIGIT gave for buying WordPerfect were discounts and the empty licensing sweeteners that have become common reasons for approving packaged software procurements.

DIGIT said the WordPerfect purchase was justified by volume price reductions, and reductions for throwing out a competing product (the old market-leading Unix suite by Quadraton), and the promise of cheap rates for updates.

There was nothing to indicate a backroom deal could be justified under Article 58 of the European Financial Regulations – but it did it anyway.

REPORT TO THE ADVISORY COMMISSΙON Procurement and Contracts

The IT Department has submitted for the meeting of the CCAM 25/03/1993, a report on the conclusion of a contract with WORDPERFECT company, for the acquisition of software word processing. The report, which has obtained a favorable n…105/93 of CCAМ (see Annex I), explained the decision of the Commission to replace the current word processor, the Q-ONE QUADRATON company, for MS Word for Windows, the company MICROSOFT, and WordPerfect for Windows, the Company WORDPERFECT.

Negotiations with the firm MICROSOFT have meanwhile continued and a draft contract has been established (see Annex II). As in the case of WordPerfect, the proposed contract with the company MICROSOFT will also extend to other office products offered by the company and are regularly requested from the Commission.

The signing of such agreement the Commission will provide many benefits, the same as those mentioned in point III of the report for ACPC WORDPERFECT.

Negotiations with MICROSOFT CORPORATION also covered the strategic direction of the company based on the current and future architecture of the Comission.

The process leading to the selection of word processors MS-Word for Windows and WordPerfect for Windows has been described in detail in the report relating to the contract WORDPERFECT CCAM.

V. SELECTION PROCEDURE OF THE CONTRACTOR

Under the provisions of Article 58 of the Financial Regulation, [the selection procedure] was carried by direct negotiation with the company Microsoft Corporation, owner of the goods concerned (MS-WORD FOR WINDOWS, EXCEL, and operating systems DOS and Windows).

The IRMB (Information Resources Management Board), in session from 16 July 1992, decided that the word processor now used by the Commission (Q-ONE QUADRATON) became obsolete, and would be replaced by word processors MS Word for Windows, of Microsoft, and WordPerfect for Windows, by WORDPERFECT. The decision was prepared by a thorough analysis of the market (see Chapter IV).

The migration is planned over three years. We must proceed with acquisitions of products concerned to benefit from the services and benefits involved. The market volume is estimated as financially and technically advantageous for the Commission to benefit from cost reductions granted by the signing of a contract with both companies.

Although negotiations were conducted in parallel with both Microsoft and WordPerfect, the report presented only for signing the contract with the firm WORDPERFECT. A further report be presented to the ССАМ as soon as the draft contract is finalised with Microsoft.

The coverage of the contract attached as we are planning to sign with the company WORDPERFECT (see Annex III) extends to other office products offered by the company that are regularly requested from the Commission, which increases the importance of the reductions granted.

The benefits of the contract include:

– Price reductions secured by the volume of purchases, taking into account the purchases made by other institutions,

– Possibility of using a single license for training room

– Discounts on the costs of updating automatically received (with maintenance),

– Permission to install software on all workstations from originals or electronic copy, with quarterly reporting,

– Updates easier by removing the obligation to return the disks originate from the supplier,

– Authorisation for staff to use the same license at the office and at home for much of the application software, or on the desktop and the laptop,

– Access to support in a range of services and
inside information (on-line support, test versions, documentation …).

In addition, contract negotiations have also covered the strategic direction of company WORDPERFECT according current and future architecture of the Commission (cf. Annex IV – Statement of Direction).

The “Committee for Users of Word Processing and Electronic Mail”, which is chaired by Secretary-General of the Commission and comprising substantially all of the Commission appointed a Technical Group to study the market “word processing” and provide a report. The findings of this report a summary of which is appended it led to the recommendation of the products of word processors MS Word for Windows and WordPerfect firm MICROSOFT WINDOWS for the firm WORDPERFECT.

After a consultation conducted by the Secretary General of the Commission with officials from other agencies, IRMB endorsed the recommendation of the Technical Gгоuре by its decision of 07.16.92 (Annex I),

V. PROCEDURE FOR SELECTION OF CONTRACTOR.

Under the provisions of ..Article 58 of the Financial Regulation, was carried by direct negotiation with the firm WORDPERFECT CORPORATION, owner of the product WORDPERFECT, 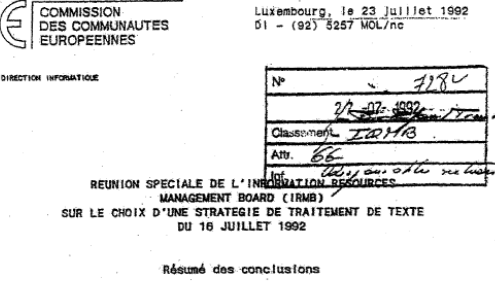 ON THE CHOICE OF A STRATEGY FOR WORDPROCESSING

Both products Word and WordPerfect for Windows (multi-size 5.1) are allowed to coexist and Commission. The official exchange format by default between the two systems will be WordPerfect format pending the availability of standardised solutions.

As for the fixtures of migration: the IRMB notes the importance of migration Translation Service and its implications for all services. This migration is scheduled over a period of 3 years until 31/12/1995.

In order to have a global and concerted evolution in the DG, they are encouraged to prepare for the end of the year, migration plans. The IT department is at their disposal if they wish, to help make these plans

The technical topics include:

will be handled by the IT department is asked to allocate the resources.

In the field of e-mail, IRMB stresses the importance of the timing of the development of products used, both within the Commission and with other institutions,

The IRMB notes the need for concerted action, consistent and transparent within the Commission on the next generation of e-mail.

Anexes:
1. List of Participants
2. Letters of Secretaries General of other institutions