Could free and open source software developers ever help break the all-poweful hold that Google has on the search engine market?

That’s the hope of the YaCy project which this week released version 1.0 of its peer-to-peer search engine.

Aiming to create a radical new approach, YaCy’s search method relies on peer-to-peer network connections rather than a central server (like Google) where results can be analysed.

With 600 peers in its network already, YaCy is aiming to expand its distributed network and stipulate that no single entity decides what gets listed, or in which order results appear. 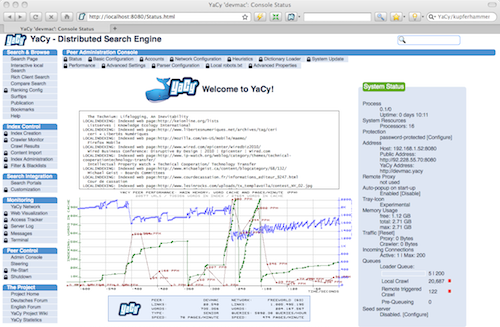 Michael Christen, YaCy’s project leader says that most of our Internet time is spent on search and so, “For such an essential function, we cannot rely on a few large companies and compromise our privacy in the process.”

The YaCy search engine runs on each user’s own computer. Search terms are encrypted before they leave the user and the user’s computer.

According to a statement, “A user’s computer creates its individual search indexes and rankings, so that results better match what the user is looking for over time. YaCy also makes it easy to create a customised search portal with a few clicks.”

“We are moving away from the idea that services need to be centrally controlled. Instead, we are realising how important it is to be independent, and to create infrastructure that doesn’t have a single point of failure,” says Karsten Gerloff, President of the Free Software Foundation Europe. “In the future world of distributed, peer-to-peer systems, Free Software search engines like YaCy are a vital building block.”

Is Google nervous? Well, come on now… it’s probably not is it?

Why is it called YaCy?

Say it out loud in a good old hometown American accent. Ya-see now?