There is so much talk of big data and cloud these days that you can barely read a single tech story without hitting a slew of descriptive adjectives usually featuring the terms ‘scalability’ and ‘flexibility’.

If you’re not scalable today, then you’re not going forward. But the cloud is all about flexibility with open ended scalability isn’t it?

Yes it is, but scalability inside a database is not an open and shut case.

Even less so is “enhanced linear scalability” and this is the goal of relational database management systems now moving to keep in line with cloud-scale enterprise-scale deployments.

In this zone this week we see that Oracle used its OpenWorld 2012 and JavaOne 2012 conference to host its MySQL Connect event.

As the “database of choice” for a applications built on the LAMP stack (Linux, Apache, MySQL, PHP / Perl / Python), news of this week’s release candidate for MySQL 5.6 has been met with interest by developers focused on web, cloud-based and embedded application environments.

NOTE: MySQL is an open source relational database management system (RDBMS) based upon the SQL (Structured Query Language). Owned and sponsored (as a result of corporate acquisition) by Oracle, MySQL runs on more than 20 platforms including Linux, Windows, Mac OS, Solaris and IBM AIX.

MySQL 5.6 RC does indeed provide enhanced linear scalability according Oracle’s announcements this week – and this technology is present to “leverage” modern hardware capabilities.

This linear scalability… once engineered into an IT stack and fully brought to bear, should (in theory) help provide simplified database query execution, give better transactional throughput and also improve application availability.

But what is enhanced linear scalability?

Vendors like to use the term scalability as something of a cure-all term to suggest that wide-ranging improvements have been made to applications, databases and other defining elements of a given IT system.

But better scalability does not just mean better performance.

Oracle is also suggesting that scalability here means that MySQL 5.6 RC has now been engineered to use more processing power across more cores and so work faster and this is why we hear the term “optimisation” so often.

What Oracle may also be suggesting by using the term linear scalability is that the database can be fuelled by more cores (or machines) without any changes to its core functional code or the code of any applications that run within it or from it.

This is where we then start to see the true definition of scalability emerge i.e. linear scalability is achieved when the database has the capability to uphold and sustain its level of performance even under “increasing loads” — and this aspect, in the cloud arena will be especially important.

“The evolution of web applications and cloud adoption has introduced new performance, scalability and reliability challenges for IT,” said Tomas Ulin, vice president of MySQL engineering, Oracle. “New features in the MySQL 5.6 Release Candidate help address these challenges and deliver a wide array of innovations to the MySQL community.” 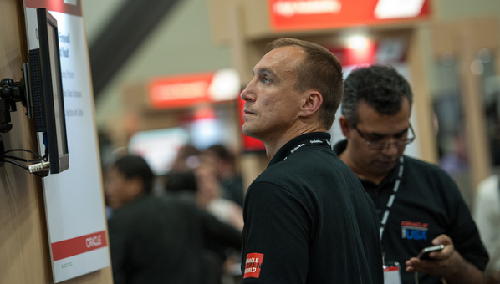