The US Army and associated federal agencies are said to be testing prototype “virtual world” technologies in a secure open source environment.

Intended to simulate “in theatre” scenarios to stimulate team building skills and wider training and analysis initiatives, the work to test out as many as 400 use cases is being carried out in the Research Lab Simulation and Training Technology Center in Orlando.

The test environment is known as the Military Open Simulator Enterprise Strategy, or (MOSES) for short.

MOSES arrives after the US military’s previous experiments with Second Life. 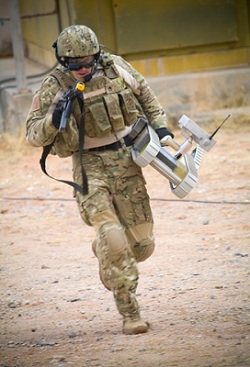 MOSES is intended to act as an experimental platform only i.e. it is not planned (at this stage) to be developed into a formal virtual training platform for the US Army.

Typical training scenarios could involve so-termed “Naval Undersea Warfare”. Use of open source technologies here in the graphical virtualisation space are said to allow for the most creative and useful rapid prototyping environments to be created, changed and further experimented with.

Associated with this area of 3-D learning are headsets capable of monitoring and measuring a user’s brainwaves in order to track not only human “vital signs”, but also emotions from anger to frustration or boredom and excitement.