The UK’s Ministry of Defence (MoD) is opening up, technologically speaking.

Earlier this year Computer Weekly reported news of the MoD’s £2m in sponsorship for a competition to find innovative ways of automating cyber defences.

Continuing this ‘openness to community contributions’ policy, Her Majesty’s Government’s defence policy department is placing the code for a web application called Ideaworks on GitHub via its Defence Science and Technology Laboratory section.

Ideaworks is a free and open source web application that allows a group of people to collate, comment on and rate ideas.

It was initially designed and built by the UK Defence Science & Technology Laboratory (dstl) and released under AGPL as a prototype tool.

According to the team behind this project, “Ideaworks was the first piece of software to be released onto GitHub because of its simplicity, low risk and potential benefit to the Free and Open Source Software (FOSS) community – particularly those organising hackathons.”

The application is split into 2 parts:

1. A Django project which provides the data API back-end and user authentication. 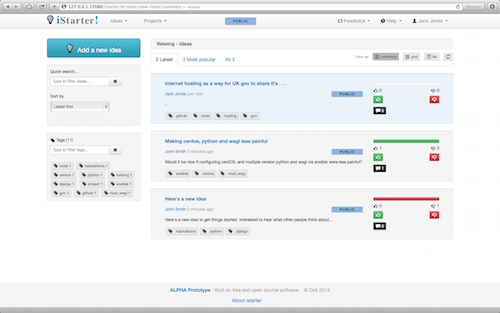