Torvalds has suggests that one of the main reasons that software application developers have delved into the kernel-level guts of his operating system is that programmers are selfish.

But did he really mean that? 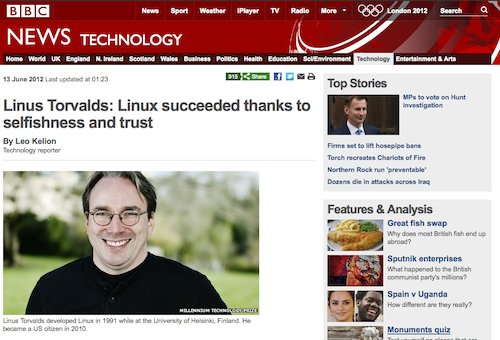 “The early “selfish” reasons to do Linux tended to be centred about just the pleasure of tinkering. That was why I did it – programming was my hobby – passion, really – and learning how to control the hardware was my own selfish goal. And it turned out that I was not all that alone in that,” said Torvalds.

The BBC also reports that 7,800 developers from 80 different countries contributed to the last version of the Linux kernel — or Kernel: 3.4.2 as it is affectionately known in developer circles.

But did Torvalds really mean selfish? Selfishness is close to egocentricity, which is what I think he really meant.

Journalists (*ah-hem!*) are very commonly known to be egocentric individuals who want to “write publicly” because they feel they can. Surely this is the same personality trait that Torvalds himself is referring to i.e. programmers want to write a little bit of themselves into history by etching their code commits onto the Linux kernel for all perpetuity.

Software application developers then (like journalists) are show offs to an extent one could argue.

No menacing letters after this blog please, it’s just a blog OK?