Cloud-based desktop environments are on the rise.

Give the popularity of Apple’s iPad and the plethora of other tablets, sub-tablets (sorry, am I supposed to say mini tablets?), high end smartphones (thank you Nokia, yes I am having fun playing with the Lumia 920 you sent me to look at) and other “connectivity enabled” devices we now have at our fingertips…

… more and more of us are getting used to placing more “digital assets” on the web (ok, sorry, I’m supposed to say “on the cloud” here again aren’t I?).

So the cloud-based desktop emerges and it’s not just one or two.

Sometime referred to as Virtualised Desktop Infrastructure (or VDI for short) — cloud centric desktops are emerging from both the proprietary vendors and the open source (with options for commercial licensing of course) world alike.

Our cloud desktop du jour is as follows…

This cloud-based desktop environments seeks to provide “central access to digital assets and consistent user experiences” on all devices.

… and there you have those words again i.e. “digital assets”.

Based on a Linux, Apache and MySQL backend, Open-Xchange says that it has designed the OX App Suite web interface to support a set of applications including mail, contacts, calendars, media and all documents.

There is also integration with Google Mail, Hotmail, Facebook and LinkedIn.

CEO of Open-Xchange Rafael Laguna has stated that Open-Xchange´s software code can also be used to set up an on-premise installation in educational institutions, public sector organisations and SME’s to deliver a cloud service currently used by over 60 million users.

“It gives the freedom to move data between providers or from a hosted solution into an on-premise installation,” he said.

Open-Xchange expects the first cloud service providers to deploy OX App Suite to their customers by the end of Q1, 2013.

Is this “just another” cloud desktop environment in the “me too” list of contenders that seem to be endlessly springing up in this space, or is this a case of 60 millions users can’t be wrong so there might be something in it.

Answer: not sure… but the firm is based in Germany and Silicon Valley and that’s often a telling sign. 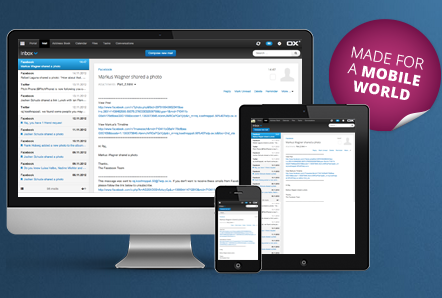