Robotic surgery specialists at the University of Washington, in Seattle, are scrubbing up a new team of mechanical medics in the shape of the new “Raven” machines.

With wing-like arms, the Raven handles many of the same extreme precision movements that the more expensive da Vinci Surgical System has been used for, but at a much lower price i.e. somewhere around US $250,000 for Raven as opposed to US $1.8 million for da Vinci.

Why do we need robotic surgeons?

Because tiny incisions cause less tissue damage and so patient recovery is faster.

Raven is also the first surgical robot to use open-source software as it runs a Linux-based operating system.

The theory here then is that researchers (and perhaps even students) can work to modify and extend the original code with the aim of improving the system itself.

Reports suggest that there has been talk of spinning off Raven as a start-up company — and a handful of universities have already expressed an interest in buying one of the new robots, news that its original developers hope will lead to the augmentation and bug eradication of the open source code underpinning the system as it now exists.

The hope is that this machine will be used to work on live beating hearts (by automatically compensating for their natural movement) rather than having to stop the organ as we do currently.

At this time, the research-oriented Raven project is still awaiting approval for use on humans by the Food and Drugs Administration — current work is restricted to usage animals, or on human cadavers. 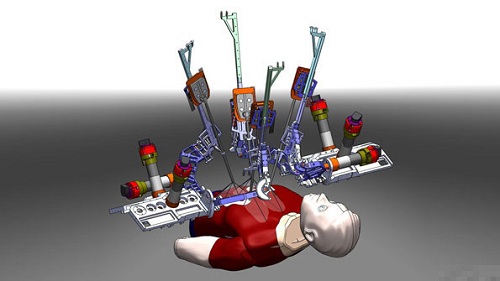