Linux is evolving. Linux is developing tiers, so that so-called “top tier” Linux distributions such as Ubuntu, Fedora, openSUSE, Debian, Mandriva and others have been grabbing more of the headlines than some of the lesser known beasts in this Unix-like operating system ecosphere.

Of course this is not quite true and not at all fair — some distributions will always be better suited to server-side deployment and then there is the whole parallel universe of mobile Linux.

So as the Linux ecosphere expands, are the smaller-scale distributions not getting the recognition they deserve?

Today’s distro du jour is Puppy Linux. A tiny little thing requiring only 100MB of space with a boot time of only 30 seconds or so, due to the fact that it loads into RAM. This slim little dog might be well suited to older hardware or within environments where resources are limited or restricted. Even if your machine has no hard disk (or a broken hard disk), you can still boot Puppy from a CD or USB stick.

According to PuppyLinux.org, the OS allows the user to “do magic” by recovering data from destroyed PCs or by removing malware from Windows.

Puppy is well behaved and does not require anti-virus software support. But the USP might just be that you don’t have to install Puppy to your hard disk to use it.

“Simply burn the ISO to CD/DVD and boot the PC or laptop with it. Once booted, you can then install it to USB flash (see the Setup menu), so you can use it for booting the PC when a CD is not available,” says the site’s Getting Started pages. 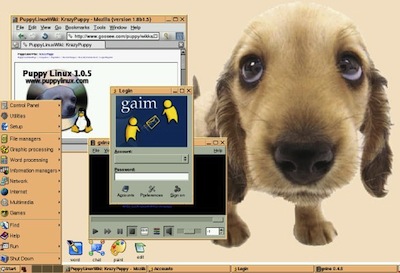 This pup also comes with a nice set of apps including a word processor, spreadsheet, browser, games, an image editing app and all the utilities you’d typically want to find in the dog pound. The site says that most hardware is automatically detected too.

Puppy Linux born on June 2003, delivered by Barry Kauler. The community that has developed is completely open, without any formal agenda or structure – and the product is completely free.

One word of balance, it sounds like this is a good dog doesn’t it? But Jollicloud appears to be more popular so I hope to look at that soon.