Did you know that a great white shark swam within a few hundred metres of your beach paddle last year while you were in Florida? 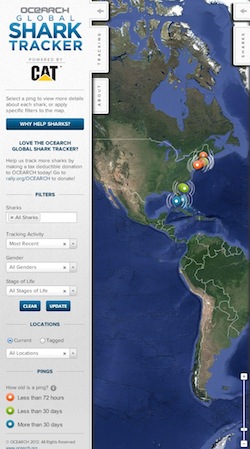 Did you want to know?

If so, you may want to plug into the OCEARCH website.

The OCEARCH researchers work aboard the M/V OCEARCH, a 126 foot vessel equipped with a custom 75,000 hydraulic lift and research platform, which serves as both mothership and at-sea laboratory.

Expedition leader Chris Fischer says that the methodology behind this project is “open source” as all scientists, students (and anybody that is interested) are able to view the data produced at the same time — this is, quite simply, not proprietary.

OCEARCH explains that its fieldwork encompasses the attracting, catching, tagging and “bio-sampling” (sounds painful) of sharks before they are released.

“The shark is monitored at all times under expert guidance and maintained on the platform by water over its gills. All fieldwork is done according to agreed and approved protocols based primarily on ethical considerations, and overseen by leading scientists/researchers,” says the research team.

The research produced is intended to be consumed by fully-fledged scientists but also by “arm chair shark trackers”, schoolchildren and higher-level students.

The OCEARCH website’s TruEarth Viewer tool allows any user to look up a shark by its own icon and get details on its species, gender, size, weight, length (no, no it’s number of teeth) and actually find out when the shark was tagged.

Oh but you hate sharks right?

OCEARCH reminds us that sharks are “apex predators” and so play a crucial role of maintaining balance in the delicate oceanic ecosystem.

“Like the big cats of Africa, sharks have an effect on all levels in the food web below them. When a top predator like sharks are removed or depleted a potentially catastrophic domino effect occurs throughout the food web, threatening the balance of the ocean,” says the research team.