Microsoft Metro (sorry, Modern Design) remains a key component of the Windows 8 optimised-for-touch experience and the user interface presentation has its fans and its opponents.

Firefox VP Johnathan (correct spelling) Nightingale has confirmed that he has asked his engineering leads and release managers to take the Windows Metro version of Firefox “off the trains”, as he puts it.

He means “off the rails”, but let’s continue.

“The team is solid and did good work, but shipping a 1.0 version, given the broader context we see for the Metro platform, would be a mistake,” he blogged.

Mozilla’s Nightingale says that he doesn’t want the team to work on the Microsoft plan because they “need to focus on the projects with the most impact for our mission” today.

“In the months since, as the team built and tested and refined the product, we’ve been watching Metro’s adoption. From what we can see, it’s pretty flat. On any given day we have, for instance, millions of people testing pre-release versions of Firefox desktop, but we’ve never seen more than 1000 active daily users in the Metro environment,” said Nightingale.

Windows 8 users who prefer Firefox to Internet Explorer don’t need to panic — the non-Metro (desktop) version of Firefox still works well in Windows 8 environments and will continue to be developed.

The codebase is off the trains and off the rails, but will live on at http://hg.mozilla.org/projects/metro for those who wish to retain an attachment to it.

Image below: Firefox Australis, the next Firefox 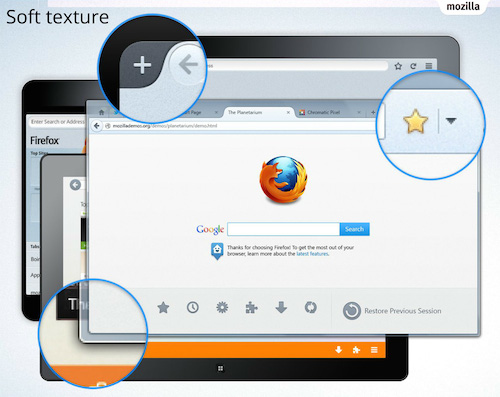