Microsoft has updated its Microsoft Cognitive Toolkit, a piece of software designed for so-called ‘deep learning’ used to speed advances in areas such as speech and image recognition — and it’s open sourced on GitHub.

By way of passing definition, deep learning is, in brief, machine learning that uses a set of algorithms that attempt to model high level abstractions and so get us closer to ‘genuine’ Artificial Intelligence (AI) — by which we mean computing intelligence that gets us closer to human-level behaviour.

The toolkit, previously known as CNTK, was initially developed by computer scientists at Microsoft who wanted a tool to do their own research more quickly.

After initial development, the software tools here moved beyond speech and morphed into a wider offering.

The now expanded intelligence offered by this software has been used by customers including an  international appliance maker — Liebherr Appliances and Microsoft are working on a smart refrigerator that will offer customers in the pharmaceutical industry new possibilities for remote monitoring and predictive maintenance.

The latest version of the toolkit, which is available on GitHub via an open source license, includes new functionality that lets developers use Python or C++ programming languages in working with the toolkit.

Attached to this news, Microsoft Artificial Intelligence and Research recently announced that they had, for the first time, created a technology that recognises words in a conversation as well as a person does.

According to the firm, “Microsoft Cognitive Toolkit can easily handle anything from relatively small datasets to very, very large ones, using just one laptop or a series of computers in a data center. It can run on computers that use traditional CPUs or GPUs, which were once mainly associated with graphics-heavy gaming but have proven to be very effective for running the algorithms needed for deep learning.”

Much of this development has been done in line with GPU company Nvidia — and Ian Buck, general manager of the Accelerated Computing Group at Nvidia has spoken of ‘tight collaboration’ between the two firms to bring these technologies forward. 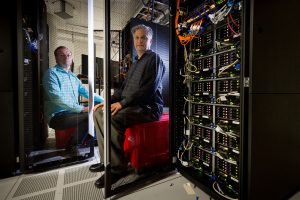