Red Hat is reported to be eyeing the Chinese market as a key propagation ground for revenue growth.

CEO Jim Whitehurst is quoted on USA China Daily saying that most of China’s stock exchange market systems are based on the Linux system.

“The open-source Linux system is the hero behind the scene,” said Whitehurst.

With current fiscal year revenues in excess of exceeded US$1 billion, the firm is thought to be targeting a growth rate that is hoped to reach US$3 billion within the next five years.

Where does growth come from?

This growth will need investment in research and development.

Companies eying other BRIC markets such as India, Russia and Brazil are (arguably) hoping that a scarcity of older legacy systems will enable new technologies driven by cloud computing and Linux to grow.

Red Hat’s strategy is likely to mirror other companies in this space and essentially then be ‘two-pronged’ i.e. hinged around the impetus to sell operating platform and/or processing power technologies in the first instance, with a meaty side order of cloud storage (much of it hybrid) as a strong second suit in the pack.

The importance of ‘local’ in China

Red Hat made its initial entry into China back in 2004 and has subsequently worked with both ‘international partners’ (i.e. HP, IBM, Oracle etc.) and ‘local partners’ too including Red Flag Software.

This proximity to local firms is important.

Red Monk analyst James Governor has spoken in the past of the Chinese government’s strict policies on software sales in China and the fact that government ministries purchasing options are in some part restricted to buying only software that has been produced inside the country.

Bloomberg quoted Beijing Today in June of this who recorded Red Hat’s Whitehurst commenting as follows, “We will accelerate the growth rate of the business. The market is coming to us because all the new development is happening on Linux or, more broadly, on an open-source platform. Clouds in general run an open source.” 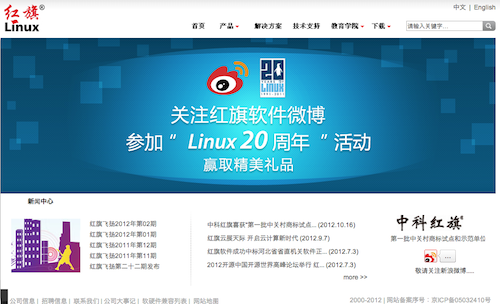