If the Linux Foundation releases a survey suggesting that open source is poised for growth, is that hard to get excited about? Well, they would say that, wouldn’t they?

If the Ovum Research team releases a study suggesting that Android is soon to become the top developer platform, is that hard to get excited about? Well, they have, haven’t they?

The Linux Foundation sees open source technology set for its grandest age yet based on low total cost of ownership, technical features and security. Comments are based upon a new survey entitled “Linux Adoption Trends 2012: A Survey of Enterprise End Users.”

Further, Ovum contends that even with Apple’s App Store application count touching half a million apps and its wider developer momentum globally, that Android will now rise to new heights based upon the fact that, well, it’s simple really…

Oh, and they also appreciate Google’s efforts to provide carrier billing, in-app payment support and other features for Android.

In other news… yes poor old beleaguered BlackBerry continues to be move forward with a new PlayBook operating system and yes of course Windows Phone will garner interest in many quarters.

But the Linux Foundation’s assertions that open source now finds “affinity among [both] new and veteran Linux users” alike speaks volumes. That sentiment matched with the fact that of the business surveyed by this study, 84 per cent of the IT shops currently deploying Linux have expanded its usage during the last 12 months.

What is more – is that, software development shops are increasingly turning to Linux as a preferred platform for “greenfield” deployments, many of which will be (as they say) for mission-critical applications.

So what has Linux really done so right?

According to the Linux Foundation, Linux has aligned to support two of the biggest trends driving global information technology today i.e. big data usage and (via a crucially secure method) virtualisation and cloud computing — and at the end of this rainbow we find Enterprise Linux.

OK sorry, Linux isn’t going to rule the world – that’s just the impression one gets when hit by a double barrel barrage of positive open source PR so early in the morning.

What’s wrong with that?

I’ll tell you what’s wrong with that; we do need to voice the main concerns thrown up by Linux if we are going to be balanced and interoperability, fragmentation, driver availability, legal/licensing issues and lack of native features all crop up in the Linux Foundation survey’s “worry list” this year to give them credit.

So let’s break it down, is Linux rising fast? Yes. 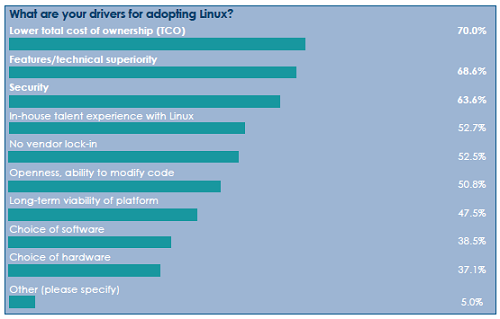