This weekend saw the Linux Mint Ubuntu-based distribution post an official notice detailing the launch of version 12. Also known by its accompanying human moniker “Lisa”, this free and open source operating system is the brainchild of Clement Lefebvre.

Lefebvre talks about the tangible donations that the project has received and evidences the fact by tracking funds on the project’s website.

Linux Mint itself is sometimes described as Ubuntu with additional custom-built applications and multimedia codecs.

New features in this release include the DuckDuckGo search engine, which does not track user’s personal information and holds no “history” record.

The Linux Mint website has this to say on the subject of its philosophy, “It’s interesting for Linux Mint and DuckDuckGo to join forces and do something together. Both projects are extremely successful but relatively small in their respective markets. If you compare DuckDuckGo to Google and Linux Mint to Windows, you can see a lot of similarities.”

NB: To differentiate Linux Mint from what Canonical does with Debian, Lefebvre specifies that Linux Mint does not fork the Ubuntu repositories or break compatibility with his team’s base distribution.

Also key in terms of new features are artwork improvements and a new desktop built with GNOME 3 and MGSE – (Mint Gnome Shell Extensions).

According to Linux Mint’s “what’s new” section, “MGSE is a desktop layer on top of Gnome 3 that makes it possible for you to use Gnome 3 in a traditional way. You can disable all components within MGSE to get a pure Gnome 3 experience, or you can enable all of them to get a Gnome 3 desktop that is similar to what you’ve been using before.”

You can take a full look at the new features and get links to download this distribution here http://www.linuxmint.com/rel_lisa_whatsnew.php#gnome3 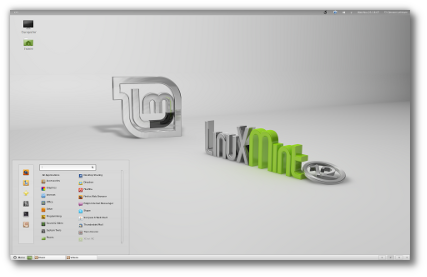