Any number of surveys will give you broad brush summary stats detailing the dearth of women in professional IT roles.

Computer Weekly has long sought to champion the wider redress of this imbalance and has regularly covered a number of women in IT initiatives and news threads.

It is therefore interesting to look at the work of open source focused coding communities such as the Python Software Foundation (PSF), which late last year recommended that all Python programming conferences & conventions create and apply a Code of Conduct so that today, the foundation no longer funds events without one in place.

NOTE: Python is an interpreted, object-oriented programming language that has gained popularity because of its clear syntax and readability. Python is said to be relatively easy to learn and portable, meaning its statements can be interpreted in a number of operating systems, including UNIX-based systems.

“Our community is based on mutual respect, tolerance, and encouragement and we are working to help each other live up to these principles. We want our community to be more diverse: whoever you are, and whatever your background, we welcome you,” it reads.

The Python group insists that its PyCon events will not discriminate against people based upon (in alphabetical order) attributes including (but not limited to):

So sexual equality and gender discrimination aside…

… the best part is that the Python community welcomes people no matter what computer programming languages they are fluent in, as the core Python architectural planning stages for development are done in English.

This last qualification is kind of the nicest of them all as it says — forget your mental differences and sexual orientation, hey, we’ll even take you if you don’t code like we do.

You may like to follow this thread and read the Geek Feminism Wiki and it’s timeline of “sexist geek incidents” here — interestingly, several of the final links these discussions lead to are dead of broken, suggesting that this kind of pressure does indeed have a positive effect.

PERSONAL NOTE: Don’t even think about asking your blogger/journalist his opinion here, he married a female programmer who taught him everything he knows. 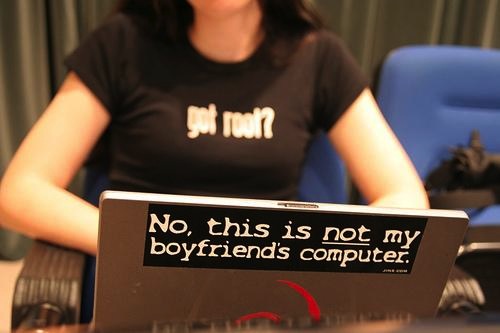