Although occasionally infuriating around roundabouts and new developments, we have placed an inordinate amount of faith in Global Positioning System (GPS) satellites as they exist for in-car and/or smartphone usage.

So why would we need an open source alternative?

Well the GPS system was created and is still predominantly run by the US Department of Defense (they mean Defence) with a history that dates back as far as the early 1970s.

The US authorities have been accused of ‘degrading’ the system from time to time (presumably to suit their own needs) and alternatives have surfaced from the Next Generation Operational Control System (OCX) to Russia’s Global Navigation Satellite System (GLONASS) system.

But British design student Philipp Ronnenberg believes that now the time is right for an open source version on GPS based on seismic ground vibrations.

Ronnenberg advocates his OpenPositioning System as an alternative to that fact that (as he puts it), “We are bound to the Americans’ military GPS and network companies.”

According to the OpenPositioning System website, this new open non-corporate or governmental navigation system is open and its goal is to gather interested people to develop the necessary software, hardware and testing processes.

The idea here is to use “seismic frequencies” i.e. the kind that are produced by the normal daily work generators in power plants. Similar seismic energy is also produced by machinery such as turbines in pumping stations or even large machines (of any kind from printing presses to coffee mills) running in factories.

These generators, machines etc. are producing seismic activity, distributed over the ground and this will help form the triangulation element needed to produce GPS-type geographical awareness.

Ronnenberg explains as follows, “The sensor prototype can detect seismic waves on the ground, walls or anything with enough contact to the ground. At the current stage of this project the sensor can detect and collect different frequencies.”

“To calculate the noise in a city out of the received signals from the ground, the sensor has to be tuned into a specific frequency. To get a specific frequency from one machine, turbine etc. the sensor has to be as close as possible to the seismic source to receive a clean and strong signal at least once. When at least three signals and their positions on a map are known, one can calculate the position within these three signals.”

It is also said that in this the project’s formative early stage, there will still be a reliance upon GPS and maps. 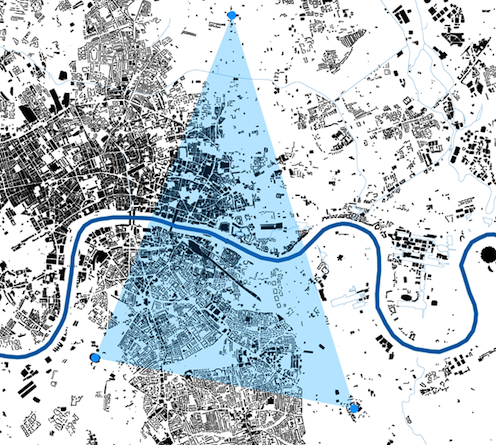