Canonical is said to be preparing the forthcoming release of the Ubuntu Linux open source operating system with a new type of interface that will provide a means of executing application functions from a command-line interface or by voice command.

The new HUD (Head-Up Display) will ultimately replace menus in ‘Unity’ applications says Canonical — and the functionality is expected to feature in the Ubuntu 12.04 Long Term release, due in April.

NOTE: Unity is Ubuntu’s standard desktop ‘shell’ or desktop interface that a user starts from in any session.

Canonical founder Mark Shuttleworth has said that this work has grown out of observations of both ‘new and more sophisticated’ users making extensive use of the broader set of capabilities in their applications.

“We noticed that both groups of users spent a lot of time, relatively speaking, navigating the menus of their applications, either to learn about the capabilities of the app, or to take a specific action,” he said.

“The desktop remains central to our everyday work and play, despite all the excitement around tablets, TV’s and phones. So it’s exciting for us to innovate in the desktop too, especially when we find ways to enhance the experience of both heavy ‘power’ users and casual users at the same time. The desktop will be with us for a long time,” added Shuttleworth.

NOTE: The HUD is expected to work by providing a “translucent overlay” that will sit on top of the Unity desktop area. Once evoked, the HUD will provide an option to find a specific application function, bookmark or file. A demo video can be viewed here.

The new HUD represents a move away from the traditional — Windows, Icons, Menus, Pointer (WIMP) interface, that has dominated the way desktops have been presented for more than the last quarter century.

Ubuntu’s HUD is essentially a search style interface that allows the user to locate specific application resources directly from the desktop. It has an autocomplete function using “fuzzy matching” logic for users who can’t remember exactly which function they want to look for.

Finally, the HUD will also be engineered to accept voice input.

This is certainly Ubuntu trying to squeeze every last drop of juice out of the non-touch based desktop environment and why not perhaps? That said, developer and user reaction has, initially at least, not been superb to start with. Time will tell. 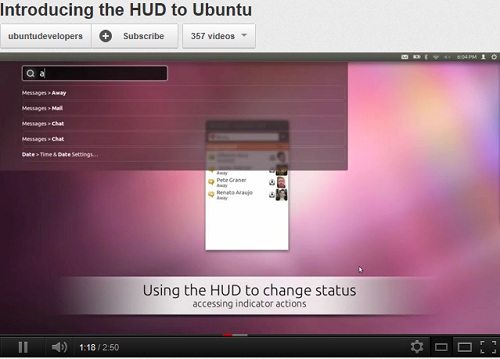