Or is it the case that 75,000 live OpenStack virtual machines can’t be wrong?

Gone are the days of benchmarking one Pentium processor performance compared to the last… and come to think of it, Apple has not pushed benchmarking as a key selling point in years and appears to be able to shift quite a few products.

Plus anyway, benchmarks are static metrics that fail to take into account an ongoing analysis of how a) hardware of any kind is used on a longer term basis and b) how real world data flows affect the software implementation being assessed.

OpenStack vendor Mirantis is clearly unperturbed by such naysaying and has just carried out a test on OpenStack 4.0 (Havana) deployed on IBM SoftLayer.

Mirantis suggests that OpenStack scales beautifully and that OpenStack could respond to on-demand real-world workload requirements for provisioning cloud resources.

It achieved a sustained rate of 9,000 new virtual servers per hour for over eight hours. 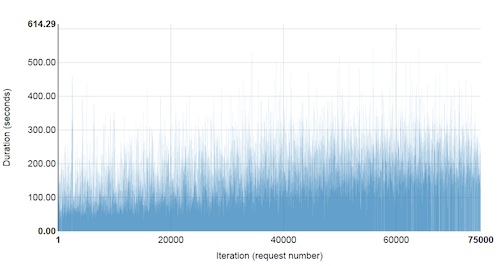 Adrian Ionel, CEO of Mirantis has said that this benchmark with IBM shows that OpenStack is maturing quickly as a robust private cloud alternative to any public cloud offering.

“We’re pushing OpenStack to its limits in harsh conditions that mimic real world production workloads and demanding customer use. Our goal is to give our customers reliable and transparent performance data for OpenStack at scale,” he said.

Sesh Murthy, VP of advanced cloud services at IBM said, “This new benchmark with Mirantis demonstrates just how powerful and flexible of a foundation SoftLayer can provide for enterprise private cloud deployments of OpenStack at scale.”

In reality, 75,000 live OpenStack virtual machines makes a better headline than the one featured here i.e. this SHOULD be interesting, let’s make it so.