Rackspace’s involvement with OpenStack and CERN at the Large Hadron Collider surfaced again late last month when the cloud hosting provider staged a London-based gathering to discuss what, when and where its cloud hosting intelligence is being deployed. 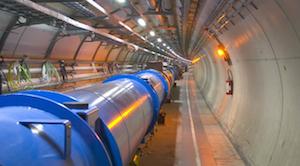 Talking about the software application development work that is carried out at CERN, Bell explains that the systems today “suffer” from being embarrassingly parallel.

“This is essentially where High Throughput Computing (HTPC) comes into play as opposed to High Performance Computing (HPC),” explains Bell.

“That is to say, a lot of compute tasks have to be carried out, but they are all executed independently,” he added.

So is CERN worth learning from?

From a developer perspective, CERN uses OpenStack and codes some of the open IP into into its own IT stack … the end result is that some of the resultant IP is contributed back to the community but some of it isn’t.

The code that runs the Large Hadron Collider is therefore available and this this gives rise to our acronym of the day...