This is a guest blog by Niclas Rydell, director of product certification, TCO Development 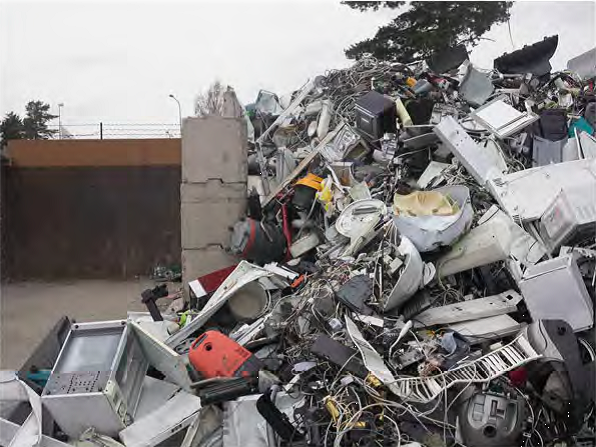 According to the United Nations University’s (UNU) 2014 Global E-Waste Monitor report, Asia generates the most electronic waste at 16 million metric tonnes per year. However, this equates to only 3.7 kg per person, whereas Europeans generated some 15.6 kg of e-waste per person. That’s over four times more than their Asian counterparts, earning Europe the title of the e-waste capital of the world.

E-waste comprises of all discarded electronic products ranging from household appliances such as fridges, heaters and lamps, to personal digital devices including computers, displays, smart phones, tablets and televisions. The UNU has determined that over 40 million tons of e-waste is generated globally each year, and this is expected to rise to 50 million by 2018.

Why is it such a complicated issue?

IT production supply chains span the entire world; whether it’s mining for rare metals in South Africa, tin mining in Indonesia, assembly factories in China, or purchasing points virtually traversing the globe. Manufacturing organisations exist across multiple borders, and as such, it is difficult for individual governmental authorities to make a tangible impact on their environmental responsibilities.

Consumers’ insatiable appetite for new electronic devices means that the life-span of products is considerably short as consumers look to swap devices as soon as new innovations become available. A report from the International Labour Organization marks e-waste as the world’s fastest growing stream of waste from domestic or industrial areas. The general lack of legislation or enforcement surrounding its disposal means that most of it is being discarded into the general waste stream.

The many different types of materials IT products contain, such as plastics, tin, aluminium, flame retardants as well as heavy and precious metals make it hazardous and expensive to treat in an environmentally sound manner. The United Nations Environment Programme (UNEP) found that only 15-20 percent of discarded E-waste is recycled in a responsible way, and estimates that up to 90% of e-waste is being illegally traded or dumped, mostly in developing countries. Recovering e-waste is an environmental issue in itself in less-economically developed countries, as for example, the harmful substances found in the plastics used to wrap copper wires are released into the atmosphere during the low-temperature burning process used to recover the metal.

In order to solve the growing e-waste crisis, there needs to be a joint effort across borders that truly reflects the global nature of the supply-chain. Multi-national organisations including governmental and non-governmental associations must engage manufacturers to achieve improvements to the current e-waste situation.

Whilst legislation helps to create legal boundaries for manufacturers to follow, creating demand for products responsibly managed throughout the entire product life-cycle will help drive the innovation required to form a more circular economy. An effective method for facilitating this transformation is to have a way for buyers of IT products to look for third-party managed certification of products with criteria that covers the supply chain from the manufacturing phase to the end-of-life handling of the product.

It is fitting that in spite of its reputation, Europe is fast becoming a catalyst for change. In 2012, the European Commission revised the Waste Electronic and Electronic Equipment (WEEE) directive so that by 2016, member states are obliged to collect 45 tonnes of e-waste for each 100 tonnes of electronic goods on sale over the three years prior. This rises to the option of either 65 tonnes, or 85% of all e-waste generated by 2019.

In February 2015, the UK Government implemented the new EU public procurement directive, urging buyers to include social and environmental factors when choosing IT equipment, and to make use of third party certifications to verify product compliance with those demands.

Europe is now moving in the right direction and leading the charge through active legislation. Buyers of IT products in Europe have perhaps the best opportunity in the world to directly influence brands towards continued improvements in environmentally responsible manufacturing through to end-of-life handling. If purchasers collaborate in asking their IT suppliers what their methods are of ensuring to ensure that their products do not end up in uncontrolled e-waste dumps overseas, perhaps Europe will finally rid itself of its title as the e-waste capital of the world.