George Osborne would have a tax boost if Coalition was tougher on IT offshorers bringing workers to the UK.

In my job as a business journalists I am constantly hearing the phrase “It’s a win, win” but when it comes to offshoring IT it seems a “lose, lose” for the UK government.

There would be hundreds of millions in extra tax for the UK if the government made it easier for UK IT workers to compete with offshore workers who are brought to the UK by suppliers. This is because offshore staff working in the UK, on Intra Company Transfers, pay much less tax as you will see below. This is because the way living expenses, which are not taxed, are bundled into salaries.

Also a result of the UK unemployment resulting from offshoring the government has to pay more out to the thousands of IT professionals that find themselves out of work.

As we have a budget this week I thought I would expand upon last week’s blog post about the tax revenues that the UK is losing as a result of the offshoring IT.

A reader has sent a link to a document he has put together about the double whammy of UK workers being undercut by offshore workers and UK tax revenues reducing as a result.  Within the document he created an example of the costs of IT workers both onshore and offshore and reveals the different tax revenues generated (Click on image below to see full size table). 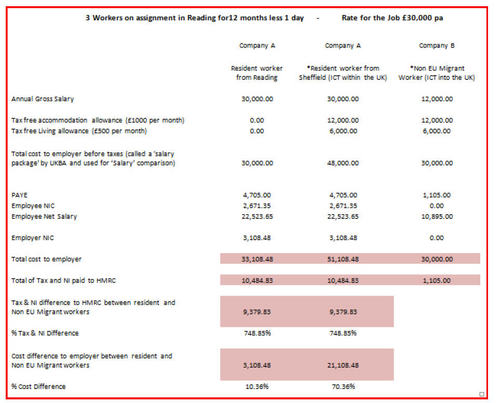 The document has some very interesting links within it.

This is what the reader had to say: “When the government is announcing cut backs and increases in taxes people will ask why are migrant ICT workers and their companies being given tax advantages at our expense?”