Capgemini will have over half of its employees in offshore locations such as India by 2015, as it continuously pushes offshore.

In a presentation given at its results the company revealed its plan. See the picture for details. 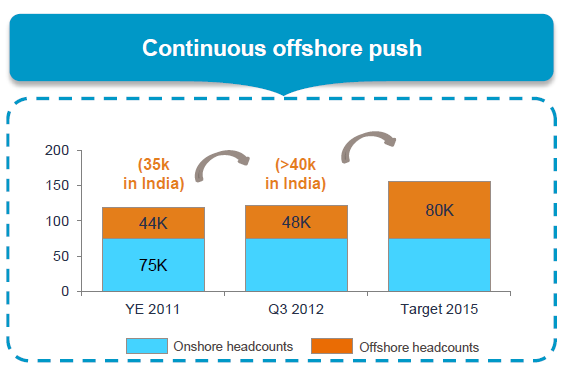 This year the company has recruited 9,264 workers in India and 2844 in other offshore locations.

The company is not planning to lay off its onshore staff but it seems that new hires will be made offshore.

I suppose everyone tries to be IBM, which has a huge India based workforce Over 100,000 according to some.

This is a common pattern e.g. ask companies like TCS how many UK staff they've actually hired, as opposed to taking UK workers on under TUPE and firing them as soon as possible to be replaced by offshore workers.

Given the amount of work (=jobs) the fat consultancies like Cap Gemini and TCS are stripping from the UK IT industry (including work paid for by the UK taxpayer), why does anybody still believe we need yet more graduates with IT skills? There aren't even enough jobs for the current generation, either within the industry or trying to join the industry.