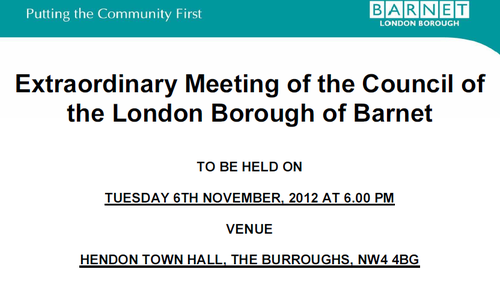 As I blogged last week Barnet councillors are emulating their fellow local government. representatives in Cornwall by holding a confidence vote over the council leadership.

On Tuesday 06 November the Conservative and council leader Richard Cornelius faces a confidence vote at an extraordinary meeting.

This is over the controversial One Barnet council transformation programme. For the leader to fall there needs to be a straight majority. There are 63 councillors in Barnet with 22 Labour and 3 Liberal democrats. So certainly not a forgone conclusion unless there is a Tory rebellion of the scale seen in the House of Commons over the European budget.

This is what the council agenda for Tuesday’s meeting where the confidence vote will be held.

“Council believes that this Conservative administration has completely lost its way over the One Barnet Programme. Council believes the process to outsource 70% of council services in two large contracts under One Barnet has been dogged by a lack of transparency. Scrutiny of One Barnet by elected councillors has been severely compromised by the administration scrapping the dedicated One Barnet Scrutiny Panel, and by preventing administration and opposition councillors outside the Cabinet from having sufficient time to scrutinise detailed financial information for the project – information which has been presented to elected members on blue exempt papers at the beginning of committee meetings, and then taken away at the end of the agenda item.

Council notes that the One Barnet Programme has so far not made any net savings, and that we are now in the third year of the programme. In fact the One Barnet Programme has actually incurred a net cost for the Council of at least £663,000. Council further notes that the Leader and Deputy Leader seem to disagree over the appropriateness of the preferred model for the Development and Regulatory Services contract – Joint Venture – and that therefore the project seems to be in complete disarray. Given the level of risk involved in the procurement of these two enormous One Barnet contracts, NSCSO and DRS, and the gambling of £1 billion of council tax payers’ money that is involved, Council resolves that the Executive Leader be removed from office and that a vote be taken on electing a new Leader who can propose a new way forward for Barnet Council and appoint a new Cabinet.”

At Cornwall Council, leader Alec Robertson lost a confidence vote over a proposed outsourcing deal.  He lost the vote 63 to 49.

Labour leader, councillor Alison Moore told me the motion, which includes the confidence vote, is an attempt to get the council to meet and discuss the project before the contracts are awarded.