Latest Blog Posts
Related Content
BlogRoll
Latest News
Download Computer Weekly
So the Apple gestation period seems to be just over six months, they’re popping them out quicker than us humans can produce babies.
As well as the iPad mini, Apple also launched the “new-new iPad” at its event in California last night (from now on I’m referring to it as the iPad 4). Interestingly it seems to have replaced the iPad 3 on the Apple website, which was only launched in March 2012. 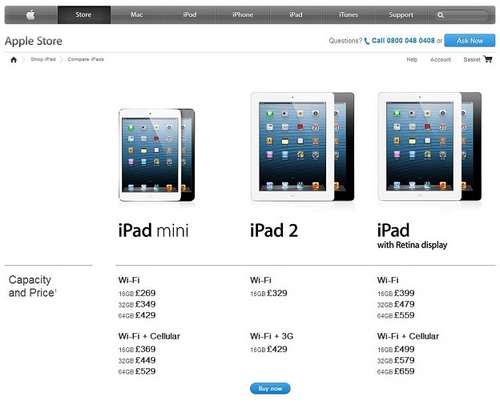 Where did the iPad 3 go? They did that quietly.
The retina display tablet has improved its A5X chip to a dual-core A6X with quad-core graphics chip and unsurprisingly requires the lightning connector. Seems as though Apple have only launched the iPad 4 to cash in on the lightning dock and the accessories market in time for Christmas. However, the iPad 4 is 4G compatible – we can almost hear the pennies rolling into EE’s bank account as we speak.
For customers who bought the iPad 3 and are rather angry at the new addition to the Apple family quite so soon, don’t worry you send your iPad 3 to an orphanage and exchange it for the iPad 4… only if you purchased your iPad 3 in the past 14 days as part of Apple’s standard returns policy.
iMac drops optical drive, will this mean the end of discs?
Among all the noise from the multiple iPad announcements, the company also revealed a new iMac desktop computer last night – and it’s lost some weight. It has slimmed down to just 5mm thick and also shed pounds by ridding itself of the optical drive.
Will this be the end of discs and aid in the movement to digital media? I hope not, I love my DVDs and Blu-rays lined up alphabetically on my shelf (ahem!). Not just that, but what about hefty pieces of software on discs which could take an age to download, versus popping them in a disc drive and away you go?
Will consumers and hardware developers now follow Apple in a zombie-like daze into the digital media market future? No! Let’s stand up to the giant and save our discs.

David Wicker - 26 Oct 2012 2:49 PM
Like lemons we purchased an ipad 3 from the Dixons Retail group, not apple direct, some 20 days before the product was made obsolete. Now we find that according to apple, the ipad 3 is obsolete and being discounted by 20% The ipad 4, the ipad 3 replacement, is 100% faster according to apple and has other significant upgrades and the same price as the obsolete ipad 3. apple is trying to appease its customers by allowing them to swap the ip3 for an ip4 free of charge if they bought it within 30 days of the announcement Pc world, who are an authorised dealer for apple, have completely refused to match this in the marketplace. As their client I feel completely let down by both apple and the dixons group and have lost out. apple is the largest company in the world and dixons is probably the largest it retailer in the uk If apple were to announce in advance what they were doing and be totally transparent , we would never have purchased the product but would have waited to buy a superior product at the same price. We and other consumers have been completely misled apple's surprise launch of the ip4 has given them a marketing advantage, but at a cost. We are that cost. This raises 3 issues 1 why would anyone buy an apple product from pcworld, when in my opinion they will be completely screwed compared to buying direct from apple? 2 the apple brand is tarnished by the very quick sunsetting of one of its most expensive products 3 the lack of brand coherence, where different channels adopt completely different commercial and trust values when selling there products in the retail marketpace, there will be nothing but confusion for the customers.
[-]

CBaldwin - 12 Nov 2012 10:42 AM
Hi David, I hope you are well. Sorry I've taken a little while to get back to you, I've been trying to get a comment from PC World about this, but they don't seem to want to respond. I agree with you, if PC World are an authorised dealer, then customers should be entitled to the same exchange policies. Absolute nonsense. I will get in touch with you if I hear anything from the company - I am still chasing. Kind regards, Caroline Baldwin