Dateline November 9, 2009. I get a call to attend the launch of Sony Ericsson’s Xperia X2, with the promise of getting one to take away and review. It’s the new Windows Mobile 6.5 phone with a slide-out keyboard, touch screen and 8Mpixel camera so I’m curious. I was no great fan of Windows Mobile in the first place but I like it even less now it has more bolt-ons than Frankenstein’s monster and half of the grace and charm.

The launch bore this out. The X2 demo phones were sluggish and sometimes unresponsive. We were told this was because it was preproduction hardware running preproduction software – the promise of having one to take away was melting fast.

Fastforward to today December 23, 2009. Waiting For Godot is on at London’s Haymarket Theatre and it seems an apt sponsorship option for Sony Ericsson. For the first few weeks I would ring up on Monday to ask the PR when my Xperia would arrive. Hearing the same mantra of “Later this week or early next week” soon wears thin. Now we find that it is expected to appear in January following an extended period of “software and battery life optimization”.

In the meantime, Vladimir, Estragon and I will continue to sit here and hold the terrible silence at bay as we wait to see if the Xperia will arrive before or after Godot. 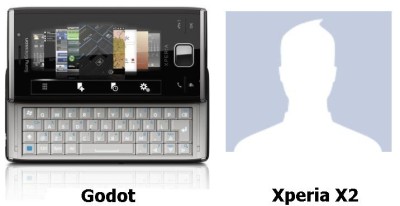