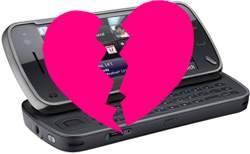 For those of you that regularly read this blog you will know that when I started this job I was hurt. I hated my life.

The pain was awful.

I had an N97 and had to write about good phones all day.

The first sign of trouble was at a pub quiz when a guy on my team didn’t even bother to try cheating using the N97 despite everyone else hammering away at their iPhones.

Naively I asked him: What do you think of it?

His answer was short and accurate: It’s sh!t.

Before that day, I thought it was going to be amazing. The build quality was great, I loved the slide out keyboard, thought the buttons were perfect and even liked the switch down the side to unlock the phone.

But what I didn’t know was that Symbian was like a cancer for smartphones.

On the day that I returned from a holiday and needed a lift from the airport it completely failed to boot and stayed that way meaning I needed a hard reset.

I fixed it by reinstalling the OS but it was that day, in the airport, that something changed inside of me.

Since then I have found myself shouting at people that try to show off any Nokia ‘smartphones’ anywhere.

Honestly, last year my new boss showed me his Nokia 5530 (not showing it off, merely showing me an image on the phone) and I felt so disappointed/angry but I managed to contain myself. Since then he’s got a Desire which has actually helped our relationship massively.

Even reviewing Nokia phones is difficult because I hate them so much for doing what they did to me. I should ‘stay professional’ but Symbian is just so awful that I can’t.

The other day a shop assistant was demoing a Nokia to a customer telling him “it’s easy to get your emails and it has Facebook, do you use Facebook?”. Seriously who doesn’t use Facebook you slimey, manipulative creep.

I couldn’t just stand there and watch.

I walked over and explained exactly why the phone was rubbish and that ANY Android phone or an iPhone would save the guy a lot of heartache. He ended up with a HTC Wildfire.

On top of everything, Nokia even released an N97 mini which was exactly the same as the N97 and not that much smaller.

So I welcome the news that Nokia is moving to Windows Phone 7. Don’t get me wrong, WP7 isn’t perfect but anything is better than Symbian and MeeGo. If they went to an OS based on Tetris I would be happy.

Hopefully it isn’t too late for Nokia, I think they’ll be fine,  and my soul will be set free once again.