Many years ago, I bought myself a Nokia N-Gage phone and heralded the new era of mobile gaming. How wrong I was. But now, after many years in hiding, I’m going to do it again.

The Sony Ericsson Xperia Play is different to any other phone on the market and to me is a magical little device.

Thanks to the iPhone, mobile gaming is massive now. Games like Angry Birds have made mobile gaming big business and the best way to spend your time when on the train.

And so Sony Ericsson has now looked at using it’s strengths in gaming to beef-up their smartphones by coming up with the Sony Ericsson Xperia Play.

This is the much-fabled ‘Playstation Phone’ that everyone dreamt about and gives Sony an edge over all their rivals by putting their PlayStation brand with the Xperia line.

What you get is a great phone and a great gaming experience all in one.

The Play is very comfortable and the slide-out joypad is brilliant. They have the iconic PlayStation controls and are so comfortable to play with.

You get the D-pad button on the left and the four iconic PS buttons (circle, square, triangle, and cross) on the right. The L and R buttons sit on the shoulder and are probably the most uncomfortable part of this gaming experience but even they aren’t that bad and you get used to them really quickly.

On the bottom right you have the start and select buttons with, intriguingly, two touch-sensitive pads in the centre that act as analogue controls.

For such a tightly knit package of controls, the lay-out is perfect and I can’t stress how comfortable it feels to play games on this device.

Sony Ericsson have really put thought into the design and made sure that the gaming experience you’re used to on your Xperia Play is as close to the home PlayStation experience as you can get.

I managed to play Asphalt, The Sims 3 and some Star Fox like 3D game. Some of the graphics were fantastic and although I had some lag on Asphalt, the gaming experience was fun. 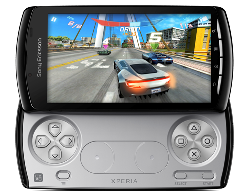 The display is fantastic. The Play comes with a decent 5.1 MP camera and games look clear and sharp on the 4 inch screen with a with a resolution of 854×480 pixels.

While that not be up there with the iPhone ‘Retina display’ it’s still very very good and you’ll be impressed when looking at pictures and videos due to the vibrant colours.

The Play has a 1GHz Qualcomm Snapdragon processor, a Qualcomm Adreno 205 GPU that handles the graphics and 512MB of RAM.

I didn’t see too much lag when playing etc. but this isn’t the fastest processor and with the Tegra 2 on the horizon might become quite dated, quite quickly. However this might be down to Sony Ericsson trying to be clever.

I think the Play will launch Sony Ericsson’s mobile-gaming offering to get us warmed up and then hit us with a beast-like phone with more memory and a faster processor to handle top-end games as the Playstation Suite builds.

The phone runs on Android 2.3 Gingerbread which is fantastic but not too different to the skin on any of the other Sony Ericsson devices (ie Arc, Neo and Pro). But this particular phone has access to the secret garden, the PlayStation Suite.

Yes, the PlayStation Suite. This could be a remarkable idea.

An online game/app store for Android. Only phones that are PlayStation certified will be given access but that means the Play is the first device that has access to this ‘Willy Wonka’ style games factory.

In the PlayStation suite you’ll be able to download PSP and PSOne games plus any other game specially made for the store.

This store will make or break the Play, and any other PS certified smartphones, as the quality and ease of access of the games will truly set these phones apart from the rest.

If the Suite is as good as I think it will be then this could spell the end of portable gaming devices in a few years. Sure, the 3DS and NGP are incredible devices but if you have a phone that entertains you enough with games and a PS3 at home, would you carry a 3DS too? Unlikely.

The Xperia Play will come with the classic Crash Bandicoot (from the PSOne) and I believe at least six games will be available on launch including FIFA 10, Asphalt and the Sims 3.

This phone is a thing of beauty. many have tried to merge the worlds of mobiles and gaming but this will be the first time that it’s worked, and not as an after-thought like the iPhone or Android (harsh I know).

The phone itself is fantastic and Sony Ericsson deserve plaudits for making such a device but it’s success will hang on whether the PlayStation Suite delivers great games and a good user experience.

Having said all that, I have already looked into getting one and that’s probably the biggest compliment a reviewer can give.