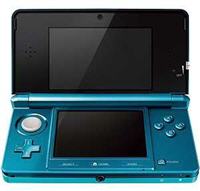 I predicted this day would come, and that day is February 26 2011. That is when the Nintendo 3DS will be released in Japan.

Then one month later, it will be released in the western world.

How will this world look? Well, it’ll be plain but full of smiles and colourful clothes if this video is anything to go by.

I think the Nintendo 3DS will change gaming teh same way the Wii did. A 3D handheld device without glasses at an affordable price? That’s truly incredible.

But it doesn’t stop there.

Yes augmented reality. You’ll see how the crazy card works in the video above. I used to collect football stickers, my neice used to collect Pokemon cards but this is something weirdly amazing.

Other functions are a slide pad, a motion sensor, mic and a gyro-sensor.

It’s backwards compatible, so it can play DS games and plays games downloaded from the 3DS Virtual Console. In fact the DS games are teh same size as the 3DS ones.

It has two outer 0.3 megapixel cameras and one inside the portable’s clamshell.

It also has WiFi connectivity as you’d expect.

There’s also this new feature that will be launched with Street Figter IV where you have the 3DS in your pocket and when you walk passed people in the street carrying a 3DS, your card characters will fight and you win points/cards.

Because 3D Street Fighter isn’t enough, check out the video below!!! Awesomeness.