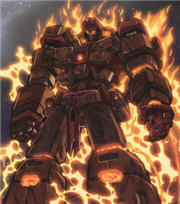 This week saw the release of the new Transformers 2 trailer where we got a glimpse of what The Fallen will look like and some where the film is going (the trailer is below).

So, who is The Fallen?

Well, basically Primus created 13 original Transformers to help him battle against his evil twin Unicron (features in the original animated Transformers movie, awesome). However, one of the 13 turned against his siblings and his creator, and betrayed them all. His original name is lost, but he was known as The Fallen. After the first battle between Unicron and Primus, the Fallen was sealed into an extradimensional limbo along with Unicron.

I for one cannot wait. I thought they did a good job with the first film (even though they didn’t stick to the comics or the cartoons). Some questions still need answering though, like will Megatron reappear? More than likely. Will Megatron become Galvatron? Quite possibly alongside the introduction of Unicron. And will Jazz make a comeback? Who cares.

Wikipedia gives some insight as to what the new film might be about:

The Fallen made his only appearance in the second volume of Transformers: The War Within – the Dark Ages.

Around 6.5 million years ago, a test of the experimental “space bridge” matter-transport system on Cybertron liberated the Fallen from his prison, and he materialized on Cybertron, where he quickly recruited the Chaos Trinity, three mystically-inclined Decepticons – Bludgeon, Mindwipe and Bugly – into his employ. Abducting Transformers that he identified as possessing “genetic potential” within their sparks – Grimlock, Blitzwing, Jetfire and Hot Spot – the Fallen planned to use their energies to awaken Primus from his self-imposed slumber, thereby alerting Unicron to his location, allowing the world-eater to renew hostilities with his old enemy.

An attack from combined Autobot and Decepticon forces led by Shockwave and Prowl disrupted his plans, and Primus himself reached out and promptly destroyed the Fallen.

That said, I say watch this space!

Shane Reinholt - 27 May 2010 11:11 AM
Many thanks for the post! Transformers both 1 and 2 were great, especially the special effects. Goodbye Megan Fox, she is not nearly as beautiful as she thinks she is.