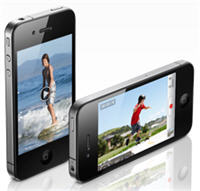 Apple has said that the reception problem with the iPhone 4 is a software fault. It appears that the signal strength indicator shows too many bars when a low signal is received, making it look much stronger than it really is.

This may be one of the faults but how come it affects left-handed people more than others? It’s all a bit sinister. Apple also suggests that a rubber bumper could be bought to avoid the problem of shorting the antenna at the bottom left of the phone. In a dig at other phone makers, Apple claims that Nokia, RIM Blackberry and Android phones also have potential antenna problems.

Some users who have tried the rubber bumper are still not happy and claim that, because it covers the connector, recharging the phone is awkward.

The software bug will be fixed in an upgrade as soon as possible, says Apple. “It’s all a bit ironic,” says a former Apple employee, “when you consider that the most popular motivational sound bite heard around the Apple buildings is ‘Just don’t f**k up!'”

Perhaps some of the Apple iPhone team will get a few power bars across their buttocks in the aftermath of antennagate.

As it’s a software fault, what we need to find out now is if the iPad has the same fault. Does anyone know?