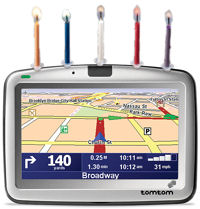 Navigation specialist TomTom is celebrating its fifth birthday but uninvited guest Microsoft is claiming a slice of the birthday cake.

It’s funny how some gadgets feel as if they’ve been around forever. How on earth did people navigate before? Well, it wasn’t so much Tom Tom as Mimi, JoJo or whatever the female partner was called (back in 2004 men always drove the car, except at the end of a night out – since then women have achieved equality, bless ’em). Today the nagging that was at your left hand side is now moveable, can be shut up instantly without an argument or changed to a male voice if you lean that way.

Anyway, Microsoft is claiming that some of the Linux bits in all TomTom products infringe its patents. Three bits in total and all to do with the file system. There are also five other car navigation issues that M$ lays claim to inventing. American patents can be so loose nobody can guess which way this case will go.

More worrying is that, outside the court case, M$ also claims that the Linux kernel infringes a further 232 patents. The fear is that if the company succeeds against TomTom it will go after other Linux-based vendors – and let’s face it, with TomTom under its belt, M$ knows where they all live.