The iPhone blew us away when it first came out but did anyone see it coming? The blog post below was written in April 2004 and talks about an iPhone with… (drum roll) “phone, camera, mp3 player and cut down PDA all in one” *gasp*. Wow, that would be amazing.

He goes on to say that you could even surf using Safari. Crazy, absolutely mad.

For a long time people have been talking about the possibility of Apple bringing out a PDA. However this is something Apple have always strongly denied. While an Apple PDA would be good, I think a smart phone would be amazing.

With Apples legendary design aesthetic, you know an iPhone would look great. Running a cut down version of OS X you’d have the power of UNIX and the looks of Aqua in a form factor to die for. Using a mini iPod’s flash drive you could have a device that works as a phone, camera, mp3 player and cut down PDA all in one. How great would that be? Surfing the web using Safari on your mobile. Being able to telnet using your phone. If Apple ever did decide to go down that route (they own the iPhone domain name btw), I’d be at the front of the que. 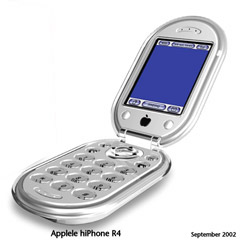 My favourite comment is from a guy called Mike that said: “I’m sorry, its too late; we’re going to have to dock 5 geek points for this post, and that’s not even counting the suggestion that porting Safari to a mobile device is feasible.”