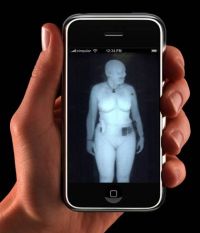 A shocking new app which lays bare your friends’ most personal secrets is openly available on the Internet. iCyou developed by Balandis Kvailas uses the iPhone camera’s ability to filter ultraviolet light to see through clothes and render the subject virtually naked on the iPhone screen.

Although the app could be used as a cheaper alternative to the X-ray machines at airports, it is more likely to be used by pranksters to embarrass their friends. Kvailas sees nothing wrong with this use of the iPhone. “Apple did not realise that the iPhone camera not only captures visible light frequencies but also overlaps into the ultraviolet and infrared zones at each end of the spectrum. By applying my software filter to the image, thin layers of clothing can be penetrated to show what lies beneath,” he said.

iCyou is a free unapproved iPhone app which Apple rejected as too hot to handle. Kvailas claims that unlocking the iPhone using Pwnage Tool, a process known as ‘jailbreaking’, allows the app to be loaded. He has created a step-by-step tutorial for novices which makes the whole process foolproof. However, as pointed out in the tutorial, this does violate Apple’s warranty conditions.

The limitation of the penetration depth will best be exploited when the sunnier weather comes along and people throw off their thick winter clothes in favour of flimsier summer outfits and swimwear.