The LG DoublePlay isn’t just trying to bring any old keyboard back, it’s rocking a split-keyboard!

If you look back through the archives at some of my other entries, I think you’ll struggle to find more than one other exclamation mark. Basically what I’m saying is, I don’t go round dishing them out nonchalantly, that devalues them you see.
I used that one in the opening sentence because of the reason for the DoublePlay’s split-keyboard. The keyboard has been separated, nice and symmetrically, to make room for a second touch-screen. 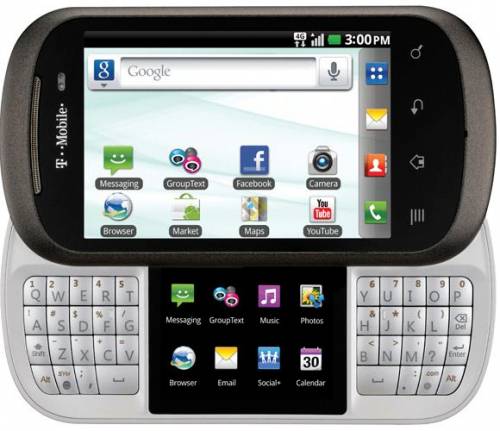 The LG DoublePlay is going to come loaded with Android 2.3, which will then be powered by a 1GHz Qualcomm Snapdragon CPU. It will also feature a 5MP camera, capable of 720p HD recording.
The main display measures 3.5 inches, with it’s smaller, interior, pixely brother measuring 2 inches.
The LG isn’t just a jokey device that the South Korean company have produced for a laugh, the fact that both screens can be used together or separately depending on what you are doing means significant thought and development has gone into this handset.
As yet, the only news I have is that it has been announced on T-Mobile, with sources reporting a release date of around October 26th. There has been no indication of pricing.