Sir David Attenborough is to be digitised as part of an interactive virtual reality experience promising hands-on access to some of the rarest items from London’s Natural History Museum. But after a difficult launch year, is virtual reality itself destined to become little more than a fossil?

The only person to have won BAFTAs for black and white, colour, High Definition and 3D programming, Sir David is no stranger to embracing new technologies.

In ‘Hold the World’, a holographic Sir David will curate a one-on-one interactive experience that will allow users to ‘hold up, peer inside, tilt and look more closely’ at fossils, bones and skulls.

Bringing together video game technology with traditional TV documentary, Sky claims ’Hold The World’ will be a world’s first, although production isn’t pencilled to begin until later this year. 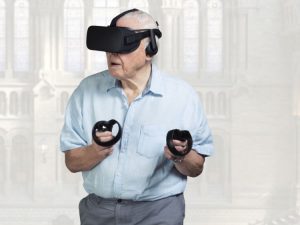 Sir David Attenborough to be transformed into a virtual reality holograph for the Sky VR/Natural History Museum collaboration (Image: Sky)

The project announced this week is part of Sky’s ongoing foray into the nascent virtual reality market. Seeking to capitalise on recent high-profile VR hardware launches, the broadcaster has been busily commissioning VR content, even releasing its own Sky VR app platform.

This isn’t the first time that the Attenborough has dipped his toes into VR: last year the venerable broadcaster designed a virtual tour of the Great Barrier Reef for the Google Cardboard Expeditions educational programme.

An estimated 6.3 million virtual reality headsets shipped in 2016, although this doesn’t take into account the many ‘free’ Google Cardboard headsets given away offering basic VR experiences. Nonetheless, it’s a disappointing return given the fever pitch leading up to the so-called ‘year of VR’.

While gaming has been a major motivator for those who have bought into virtual reality, there has been precious little else to compel consumers to invest. Despite major studios committing to VR content, little beyond novelty has stood out so far.

Interactive social content may shortly get some traction though, with details of the new Facebook Spaces VR beta revealed at the firm’s annual F8 developer conference this week.

Aside from the lack of content, the current generation of VR hardware is still primitive at best: uncomfortable, often tethered headsets feature limited motion control and frequent motion sickness.

Selling the VR vision to enterprise and professional markets has proven trickier than anticipated too. Envelop VR is one high-profile example of the difficulties faced: the heavily VC and angel-backed firm which offered virtual Windows desktop environments shed half its staff before folding earlier this year, its CEO telling GeekWire how challenging it was to figure out the best use cases for “immersive computing”.

Meanwhile, back at the Natural History Museum, Sir David remains excited about the project, describing it as ”extraordinary new step in how people can explore and experience nature, all from the comfort of their own homes”.

The veteran broadcaster has covered the story of evolution throughout his career — many will hope that Sir David’s continuing rubs with virtual reality will help speed its evolution too, lest it goes the way of 3D and the dodo.