Latest Blog Posts
Related Content
BlogRoll
Latest News
Download Computer Weekly
I was lucky enough to attend the T3 Gadget Awards last night, a lavish affair, I was told to “dress to impress” and was welcomed with endless champagne and a slap up three course meal.
But enough with the bragging – it was all to celebrate the best technology with twenty categories including Innovation of the Year, Work Gadget of the Year and App of the Year.
The iPhone and business
The iPhone 4S won Work Gadget of the Year (the  iPhone 5 was released too late for consideration in this year’s award), much to my dismay and confusion. Last year the BlackBerry Bold won this category. And this year the iPhone 4S managed to edge out the competition of the Epson PX830FWD, Logitech Performance MX Mouse, ASUS Eee Pad Transformer Prime, BlackBerry Bold 9900 AND Samsung Galaxy Note. 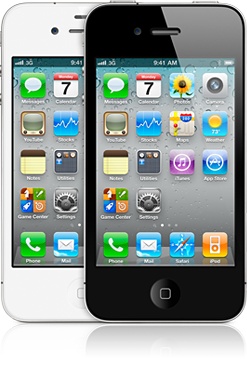 What continued to baffle me was that with the other category winners, as the person representing the gadget made his or her way up to the stage, there was a short announcement explaining why the product/company/person had won the award. With the iPhone 4S winning the Work Gadget of the Year, there was no announcement. Obviously everyone would just instantly accept that Apple would win. Apple can do no wrong. No questions asked.
Now I understand that BlackBerry as a company hasn’t had the best year, but what advancements has Apple made from the iPhone 4 to 4S which makes it a better business device over the BlackBerry Bold?
You could argue that BlackBerry has taken too long to release BlackBerry 10 which has seen its use as a business gadget decline. Now Computer Weekly has been told that it will launch in January 2013, will this shake up next year’s awards?
T3 justified Apple as the winner of this category due to the apps and accessories available for the product (see below), but shouldn’t the winner then be all the third party companies who have been beaten into submission to comply with Apple’s rules and regulations in order to release apps and accessories? And the business user also has to BUY these extras, they don’t come with the £500 device. And now that the iPhone 5 has been release with a different connector, accessories must be bought all over again.
T3 Award for Work Gadget of the Year: Apple iPhone 4S

Despite being superseded by the iPhone 5, Apple’s iPhone 4S has been one of 2012s standout gadgets and, as a testament to its versatility it picked up the T3 Award for Work Gadget of the Year. The Retina Display might trounce the displays of other smartphones but what makes this the best business accessory is the sheer amount of apps, accessories and extras available for Apple’s smartphone.
Other winners
A stand out from the crowd winner was certainly, Asus. The company won the Computer and Tablet of the Year with the Asus Zenbook UX31 and the Google Nexus 7 by Asus respectively. Additionally, Asus secured the Design Award Winner category with the Asus Eee Pad Transformer Prime as well as the Tech Brand of the Year award. The overall Gadget of the Year was also awarded to Asus with the Google Nexus 7 impressing the judges and T3 readers to win its second award, demonstrating that there is certainly room for a 7 inch tablet in the market.
BBC’s technology correspondent, Rory Cellan-Jones, swept away with the Tech Personality of the Year award, while the Outstanding Contribution To Technology Award was handed out to Lord Alan Sugar. 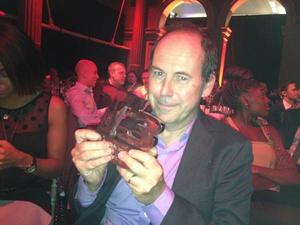 Rory Cellan-Jones posted this picture
to Twitter last night after winning his award
Great night T3, thanks very much, there were some very worthy winners including the Google Nexus, Rory Cellan-Jones and the Samsung Galaxy S3 for Phone of the Year, but I’m sorry I can’t agree with you that the cool consumer brand of the year, Apple, deserves the award for the best business product.
Check out Computer Weekly’s ideal shortlist for the best work gadget!