The late, great Tommy Cooper once joked: “I went to the doctor the other day. I said ‘Doctor, it hurts when I do this’. ‘Well don’t do it, then’.” 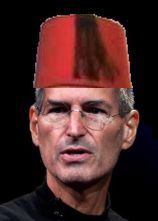 Perhaps Steve Jobs is a secret fan when he said, “Just avoid holding it that way“. Maybe he was tempted to add, “Jus’ like that. Not like this, like that.”

Dipping into the Tommy Cooper Joke Book, I guess future comments may include:

I took my iPad to the optician. I said, ‘Every time I turn it on I get double vision’. So he gave me an eye-patch.

This guy’s in his car, driving along, and his boss rings up on his iPhone and says, ‘You’ve been promoted.’ The guy swerves. The boss rings up a second time and says, ‘You’ve been promoted again.’ He swerves again. He gets a third call and his boss announces, ‘You’re managing director.’ He swerves off the road and into a tree. A policeman comes up and says ‘What happened to you?’ and he replies, ‘I careered off the road.’